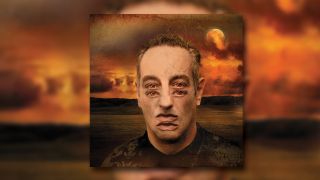 British prog rockers Arena have revealed the new artwork for their forthcoming new album Double Vision, to be released on Verglas in May.

Prog was treated to an exclusive preview of the album yesterday at the band's Thin Ice studios in deepest Surrey. The centrepiece of the album, The Legend Of Elijah Shade, clocks in at over 22 minutes and sees a return to lengthy epic-based prog akin to the much-loved Solomon from the band's 1995 debut Songs From The Lion's Cage. other highlights include the acoustic-led Scars and rocking opener Zhivago Wolf.

"We've noticed a few comments online from people happy we've done that," keyboard player Clive Nolan told Prog. "I have to be honest and admit I didn't know if I could still do it when I sat down to write it, but eventually it came flooding back.

"The thing is, even with things like Supper's Ready, they're really shorter pieces all stitched together to create something bigger. But this is loaded with references to older material, like The Visitor album, which I think the fans will have fun with."

Arena head out on tour in April and May, where they will be performing 1998's The Visitor album in full, along with a second set that will feature tracks from Double Vision. They will play: