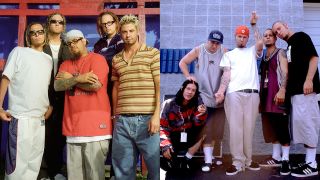 For the first time in nearly two decades, Korn and Limp Bizkit are touring the UK together later this year. Having come up through the nu-metal ranks in the mid-90s, both bands are still going strong and draw massive crowds at any festival you care to mention. In the 19 years since their last British encounter, Korn have deviated away from nu-metal, embraced electronics, and returned to their roots again, while Bizkit have been touring as the ultimate party band since the release of Chocolate Starfish. Kindred spirits and survivors of the noughties metal boom (and subsequent slump), how does Korn founding member Munky feel about heading out on the road with the Bizkit one more time?

What is the feeling in the camp about the UK tour with Limp Bizkit?

“I’m going to speak for myself, I am super excited to tour the UK with those guys. They are amazing musicians, they’re very talented and cool guys. I have nothing but great memories with them. It’s going to be a lot of fun.”

You guys shared a bill on the early Family Values tours. What are your memories of those shows?

“It was fuckin’ chaos. It was 24-7 partying. You had people hopping on different buses and partying. It was a total party. We had a lot of fun. Some of my best memories are from those tours. Plus, we had Rammstein out with us and those guys take partying to a whole different level.”

“We didn’t know what we were doing. There was an innocence to it. We were just creating something that we enjoyed playing. We were being ourselves and creating a sound that incorporated all of our inspirations. We’d do things because it reminded us of Sepultura or NWA or the funky scratch sections of Cypress Hill. That sound was a bit conglomerate of inspiration.”

There have been some well-documented feuds between the bands. What’s your relationship like now?

“When you’re young, egos tend to play such a big part. It’s just that time in your life and now we’re all grown up, we’ve all got kids and we just want to have fun. I think we can put all of that stuff from the past to one side and we can all laugh about it. I think everybody is excited for the tour and we can all sit in a room together now and we’ll talk about all of the crazy times that we had and all of the stupid stuff we did and said. I know I can. We’ve been on tours and festivals with each other through Europe in the last few years and we’ve ran into those guys and it’s all good. There’s never been any, ‘Oh man. I don’t want to see that guy,’ or anything like that.”

When you toured with Slipknot last year, you played Sabotage together. Would you be game for doing something similar with the Bizkit guys?

Life Is Peachy is 20 this year, could you celebrate that by playing it front to back?

Korn and Limp Bizkit tour the UK at the following dates: