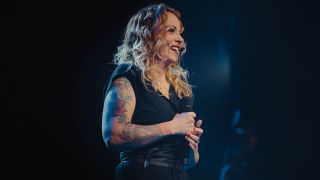 Anneke Van Giersbergen has revealed that her live collaboration with the chamber orchestra Kamerata Zuid will be released later this month.

The 13-track live album is titled Let The Light In and it’ll launch on July 31 on Bandcamp, and was recorded over several concerts throughout late 2019.

Anneke says: “In December 2019, Kamerata Zuid and I did a number of concerts together in North Brabant – a province in the south of the Netherlands where I was born and raised.

“The setlist offered a variety of my own songs with a classical twist, two renditions of my favourite collaborations and some classical arias.

"The concerts also featured a brand new piece called Let The Light In, that I wrote together with famed Dutch composer Anthony Fiumara. All arrangements were written by Ruud Peeters, with the exception of the title track.

“We recorded all seven concerts and artistic director and conductor Frank Adams and I cherry-picked our best performances. I hope you will enjoy the album as much as we enjoyed creating it. More updates to follow as we approach the release date.”

Let The Light In was recorded by Jonathan Heywood, mixed by Guido Aalbers at Giesound and mastered by Darius van Helfteren, while Hajo Müller designed the album cover.

Those pre-ordering the album will receive the track Circles prior to the album’s release.