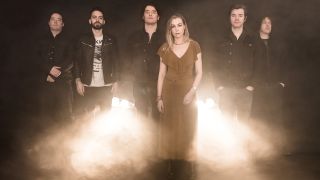 Anathema have been announced as the first headline act for next year's Prognosis Festival. And the band will be performing a special set to celebrate the tenth anniversary of their We're Here Because We're Here album.

"We never usually do anniversary tours of particular albums, but in the case of WHBWH, which is the album that began our rebirth, we feel this is something we want to do," Daniel Cavanagh told Prog. "What I love about this album and that time in our journey is the life affirming qualities in the music. It’s an album of hope, reflection, of summer, of an intense uplifting emotion. We will do all we can to augment the trip with a never before seen light and video show to enhance the experience. Join us in the dreaming light."

Prognosis, which was held for the first time this year in Eindhoven with performances from the likes of TesseracT, Haken, Leprous, Soen, COG, Devin  Townsend and more, will return next year on March 20 and 21, 2020. Blind faith tickets for next year have already sold out, but early bird tickets are now available, priced at €79. Regular tickets go on sale on July 1, priced at €89.