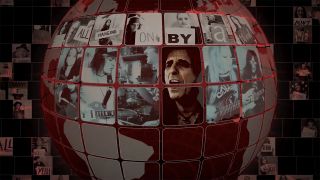 Alice Cooper has released a video for his new track Don’t Give Up.

The song was produced by Bob Ezrin during the current lockdown and is said to be a “spontaneous reaction to the challenges facing us all right now.”

Cooper previously called on fans to share either a photo or a video of them holding up signs with messages of unity using lyrics from the track. More than 20,000 responded, and Cooper hand-picked his favourites to be included in the final promo.

Cooper says: “Don’t Give Up is out today. It’s a song about what we’ve all been going through right now and about keeping our heads up and fighting back together.

Cooper will release Don’t Give Up as a limited edition 7-inch picture disc on August 14 through earMUSIC, which will be available exclusively through the label’s online store.

In March, Cooper reported that he was using the gap in his touring schedule to continue work on his new album – the follow-up to 2017’s Paranormal.

He told Rolling Stone: “While our management is working to reschedule the postponed shows, I’m going to finish work on my next album, which is nearly done.

“At least now I won’t be squeezing in vocal recording sessions on days off, between shows. I don’t like a lot of time off, as anyone who sees my schedule already knows, but a little extra time at home can be re-energising.”