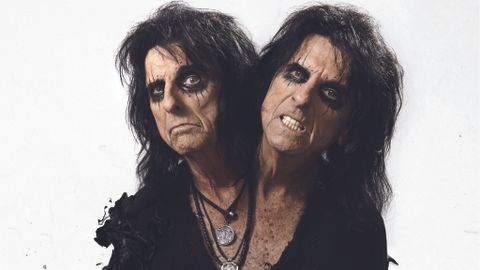 I don’t want to alarm you, but the fate of rock’n’roll’s future lies in Alice Cooper’s bony hands, and if this album is garbage, then we’re doomed. I mean, you should know that much right now. At this point in his career, Alice is one of the very few 70s era rockers still vying for relevance. Sure, he’ll play I’m Eighteen when he’s 81, until he needs those stunt crutches for real, but he’s also concerned with writing solid, biting, hook-heavy rock’n’roll songs right now, and he’s still dreaming of his next big hit and his next major cultural comeback.

And if it can work for him, maybe it can work for you. Maybe if Alice is cool again, you will be too. Maybe if the kids dig this record, maybe they’ll dig rock’n’roll again. Maybe we won’t all be shuffled off to the elephants’ graveyard to die lonely, vinyl-only deaths while the youth party on with their EDM and their vaporwave Spotify playlists and The Decemberists or whatever it is they listen to. There’s a lot riding on this fucking album, man.

Well, here’s the good news: it doesn’t suck. It’s no Killer or Billion Dollar Babies. I mean, it’s not even a Flush The Fashion, really. But it’s got enough fist-shaking brainbangers to get us through the summer at least, and for long-time fans of shock rock’s greatest grandpa, Paranormal offers a potentially breathtaking bonus: two songs from the surviving members of the original Alice Cooper Band.

Alice has never been one to needlessly share the spotlight, so those tracks are on a second disc, but at least one of ’em, the gender-bending glam-stomperGenuine American Girl, is everything you could possibly want from the gang that brought you School’s Out. A tongue-in-cheek tale of a cross-dressing bruiser, like all classic Coop songs it veers wildly from one genre to the next: a little 50s teen tragedy pop schmaltz here, a little mid-70s glitter-punk slither there. It’s great stuff.

The second ACB track, You And All Your Friends, is more traditional and less interesting, a Who-esque hard-rock rave-up that’s more of a jam than a killer cut. Still, these are the first tracks from this groundbreaking band since 1973. That’s a big deal, and with the original band touring again, it may be a taster for more to come.

The album proper leaves the straight-up horror concept album trappings of 2011’s Welcome 2 My Nightmare behind, offering up a grab bag of radio-ready rockers peppered with the kind of stunt-casting Coop’s been piling on his albums since MC5 main man Wayne Kramer waltzed into 2003’s Eyes Of Alice Cooper. This time around there are guest spots from Billy Gibbons, Roger Glover and U2 drummer Larry Mullen, Jr, and these choices are pretty indicative of where this album’s at, musically speaking.

This is a classic rock record: straight-up, no rap, no lo-fi garage rock, no weirdo new wave, no real curveballs. It’s Alice and his favourite producer Bob Ezrin paying homage to Deep Purple, Jimi Hendrix, the Stones and the banging cowbell era.

The opening title track is probably the only real deviation, a throwback to the theatrical pomp of Alice’s mid-70s top-hat showbiz phase. It’s a lot to swallow but quickly gives way to the simple headbopping teenage dirtbag thrills of Dead Flies and the chugging guitars and Purple-powered organ flail of Fireball. Paranormal’s monster, if you’re looking for feral, ripsnortingrock’n’roll, is the glam-punkyRats, a real jet-screamer, positively the most energetic blast of teenage noise you’re ever gonna get from a 70-year-old geezer.

Elsewhere, it’s mostly hit or miss. The Sound Of A is straight-up Pink Floyd worship. Holy Water is goofy horn-rock. Paranoiac Personality is fun but probably a little too disco Def Lep for its own good. Isoftwareuiphraseguid=“857eb543-a867-42d9-a6d6-d6a20624dca8”>’ve Fallen In Love And I Can’t Get Up features Billy Gibbons on guitar and sounds like a Fandango outtake. Dynamite Road is standard, black-eyed barroom boogie. And all of it is over-produced, autotuned and sanitized for your protection, a Bob Ezrin trademark of late. The end.

Taken as a whole, it’s a pretty patchwork affair, but so are all Alice Cooper albums, even the great ones. And while this isn’t one of the great ones, it also doesn’t sound like the work of a washed-up has-been who’s out of time and ideas. Have you heard that last Meat Loaf record? Or Danzig’s? There are very few rockers of Alice Cooper’s stature that can still deliver the goods.

The important takeaway, especially with Rats, Dead Files and Genuine American Girl, is that Alice Cooper, with or without his old cohorts, can still kick out the jams, brothers and sisters. Phew.