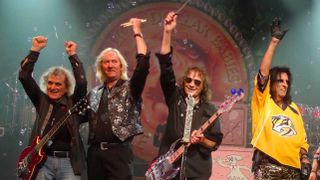 The first UK showing of the documentary Live From The Astroturf, Alice Cooper, will take place in East London next week.

The film focusses on a rare live performance from the original Alice Cooper band, which took place at the Good Records store in Dallas in 2015. The soundtrack of the show was released as a Record Store Day Black Friday release in 2018.

The premiere will take place at the Castle Cinema in Hackney, London, on Wednesday October 9, and be attended by former Alice Cooper bass player Dennis Dunaway. Dunaway will also premiere his short film, Cold, Cold Coffin, which tells the story of wealthy tycoon who discovers that his young wife married him for money.

The UK premiere is followed by one in Los Angeles at the W Hotel in Hollywood on October 14, where the same line-up of special guests will be joined by original Alice Cooper band member Michael Bruce.

This event will be followed by a Q&A hosted by Howie Pyro (Intoxica Radio/Danzig/D Generation) and Keith Morris, author and singer from Off!, Flag, Circle Jerks and Black Flag. Tickets are on sale now.

Alice Cooper kicks off the UK leg of his Ol' Black Eyes Is Back tour this evening in Manchester, and plays London on October 10. Full dates below.