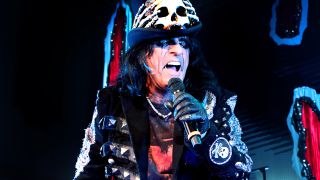 Alice Cooper is coming back to the UK later this year on the Ol’ Black Eyes Is Back tour.

Cooper has lined up seven shows, kicking off at the Manchester Arena on October 4 and wrapping up with a set at the Cardiff Arena on the 12th of the month.

He’l be joined by special guests The Stranglers and MC50 featuring Wayne Kramer.

Alice says: “We’re coming back in October for a big tour with our new show Ol' Black Eyes Is Back. It’s going to be a great night with my very special guests The Stranglers plus the MC50.”

Cooper has lined up the dates to mark the 50th anniversary of his debut album Pretties For You, which launched in the summer of 1969.

A pre-sale will get under way at 10am tomorrow (February 20) at 10am, while tickets will go on general sale on Friday at 10am.

The vocalist’s last studio album was 2017’s Paranormal, which was later followed by last year’s A Paranormal Evening at the Olympia Paris.

Alice Cooper: A Paranormal Evening At The Olympia Paris
Alice Cooper's stunning live set from his recent tour in support of his Paranormal album is celebrated with this new release, featuring classic tracks Poison, I'm Eighteen and School's Out. View Deal