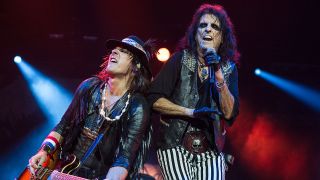 Despite more than 20 years as guitarist in Alice Cooper's band, Ryan Roxie isn't resting on his laurels. As well as playing with Gilby Clarke and Slash's Snakepit back in the day, he's a member of the Stockholm-based sleaze rockers Casablanca, and is about to release his first official solo album, Imagine Your Reality.

"With this album I think we kept the spirit and power of the three and a half minute minute rock song intact, as well as keeping the dream of guitar-driven music alive and well," says Roxie. "I can’t wait for people to experience my reality."

That reality includes guest appearances from the likes of Cheap Trick's Robin Zander. "Cheap Trick were a major influence in my musical upbringing," says Roxie. "Both Robin Zander and Rick Nielsen have joined us onstage at Alice Cooper shows in the past and have always been the most quintessential rock stars."

Ryan Roxie is currently on the road with Alice Cooper in the US, while Imagine Your Reality is released on May 25 ands is available to pre-order now.

Below, he picks his 10 favourite Alice Cooper songs.

When the bell rings and every hand in the audience goes up, that is rock'n'roll bliss! I have had the honour for many years to start out this Classic Teenage Youth Anthem (far beyond our teenage years)... and somehow Glen Buxton channels through me every time I play that riff.

Between High School And Old School

How could I not include a song that I was able to write with the boss at the top of the list? Always identified with the title of this one, 'cause after all, aren't we all just a little bit stuck in between? From The Eyes of Alice Cooper.

From the album From The Inside, a less-than-three-minute rollercoaster ride of guitar riffs and layered harmonies. A challenge and a joy to play live.

I get to play my double-neck guitar on this one... enough said!

From the Flush the Fashion album, this song shows off Alice's 'new-wave' avant-garde side... a side that's worth showing.

Another one of those you know instantly from hearing the opening riff. Thank you classic rock radio for continuing to play this song. That keeps us touring and keeps the original band's royalty checks rolling in!

AC's tribute to all the old James Bond films. Musically, it showcases the entire band... dare I even say the words 'prog rock'?

Another track I was able to co-write with Coop on the Dirty Diamonds album. Nita Strauss gets to 'hurricane' all over the stage and I get to go wild on my wah-wah pedal... everyone's happy.

Another classic off the Love it to Death album. One of those riff rock songs that makes for near train wrecks certain nights and musical nirvana moments on others, when we nail it.... once again proving that 'We still got a long way to go'!