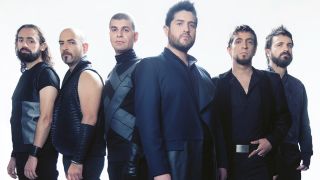 Aisles have released a stream of their track Upside Down.

The song features on the Chilean outfit’s fourth album Hawaii, out on July 29 via Presagio Records.

Guitarist German Vergara says: “Upside Down talks about a future society that has gained awareness of the tragedy that is losing the planet Earth and decides to begin again, living life in a completely different way.

“Emotionally it’s a song about regret, but at the same time hope, happiness, and freedom. Musically, we wanted to convey the feeling of vertigo because these humans will live in cylinders that rotate on their axes generating gravity.

“It’s a powerful song. Its energy comes mainly from the vocal performance and the piano lines to transmit the idea of change, transformation and freedom. It has one of the most original guitar solos we’ve ever written.”

The group were forced to cancel their planned European tour in April following the terror attacks in Belgium. They’re planning a return towards the end of 2016, with further details to be announced in due course.

Aisles previously released the track Club Hawaii from the double album, which is available for pre-order.