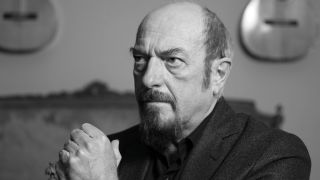 If Ian Anderson is to be believed, Jethro Tull are on indefinite hold. And if anyone can say for sure, then it’s the man who put the band together in late 1967 and steered them through the subsequent decades as the sole constant member.
Tull’s journey has been one of the most successful and fascinating in rock, from their beginnings as a blues band through the complex prog epics and folk rock of the 70s, via their dabblings in electronics in the early 80s, up to their unlikely 1989 Grammy win, which saw them unexpectedly beat thrash metal band Metallica.
These days, Anderson is a reluctant and slightly crotchety elder statesman of rock, but if anyone has the perfect view of Jethro Tull’s finest moments, it’s him. Here, then, are his top 10 Tull songs in his own words.

“This was the B side of our single Love Story and was recorded in November 1968. It was really just me in the studio with a mandolin. A string quartet was dubbed on later, as were sleigh bells. This was the first time I’d ventured in the studio totally alone. I bought the mandolin in a pawn shop in Denmark, where Tull had just played. We were on our way back home by ferry; we had to go that way because guitarist Mick Abrahams refused to fly.

“Now, I had no idea how to tune the instrument, and it was hard to play. And I recall sharing a cabin with Mick on the return journey, and I kept him awake all the time as I wrote a song on the mandolin. That turned out to be Fat Man from the Stand Up album, which Mick was upset about, because he thought it was about him, because he had a plump waistline at the time. But it wasn’t at all.

”A Christmas Song, though, was about the way in which the real relevance of Christmas has been lost. We forget it was Jesus’ birthday and also the fundamentals of the story. They’ve been submerged by the celebratory aspect. I am not a Christian, but I am a strong supporter of Christianity.”

“From the Stand Up album, and one of the songs we played when appearing at the Isle Of Wight Festival in 1970. And it’s now back in our set, making a welcome return. I suppose it’s quite an easy piece, which allowed Martin Barre and myself to interact on guitar and flute. It was the beginning of our musical relationship, as we explored the way in which we could perform together. It remains a favourite with fans.”

“Again from the Stand Up album, and it showed the way in which we could use light and shade in a song. I originally learnt this from Ten Years After, and then noticed the way in which Led Zeppelin approached the same idea when we toured with them in 1969 in America. It’s the way in which you can go from a quiet passage to something altogether more blazing within a blink of an eye. In that fashion you employ the volume control on your amp to its fullest capacity, going from 1 to 11, as it were.

“This song is also very much steeped in the blues rock tradition, and I know Joe Bonamassa, for instance, has played it quite a lot on his set. Indeed, when I guested with him at Hammersmith Apollo a few years ago, we did this song and the crowd appeared to know it through its position in Joe’s set.”

“This is the title track of the Aqualung album, and is really a piece of social realism. It’s street photography and something like a painting from the (19th/20th century) English artist Walter Langley. It’s really about observing people, and learning from what they do and how they behave. The lyrical idea came from a photo my first wife, Jennie Franks, took of homeless people south of the River Thames when she was a student. In fact, she helped to write the lyrics for the song. The line “Snot running down his nose…” is not something I would have written! That came from her.

“I believe the sentiments of the song are as obvious now as they were in 1971, because the issue of homeless people hasn’t gone away. You still see them everywhere. In the 50 and 60s, we called them tramps, but they were harmless. Now, as so many are on the streets due to drugs problems or sexual exploitation it has become if anything more worrying. All of which makes Aqualung so relevant.”

“Again from Aqualung, this has been the Jethro Tull encore since 1972. Despite the title, it’s actually about the problems of population explosion and the demands society puts on us as a consequence. We’re on a train heading in the future, whatever that might lead, and we cannot get off. The song is meant to be a bit scary and threatening.

“Train songs have been with us ever since the blues began, and I have written my fair share of these. I keep being drawn back to the subject, because public transport is part of my life. I don’t drive, so rely on buses, trains and the like. But here it is about a serious social issue.”

“This, the title song of our 1977 album, was unashamedly twee. It’s decorative folk rock. It openly extols the virtues of the countryside, and the values you want to impart through this to other people. I suppose it is country rock, but in the British sense. It’s all delivered with a fair amount of hefty music. There are big guitar riffs and a lot of flute as well. And it does get a little angry, but with a purpose.”

“The title track of the 1978 album. It’s about social realism, which is what a lot of my songs are about. I enjoy being observational, but also welcoming you into this world. Usually, I stick to subjects I know something about, although I have been known sometimes to stray into territory that’s a little more unknown. But on this occasion I was sticking to my feelings about the changing world. The music was very much pastoral and British. It must have seemed like deeply unfashionable folk rock at the time, coming as it did towards the end of the punk era, and just before the next big thing happened, which was synth pop.”

“That’s from Crest Of A Knave, which won the Grammy in 1988 for Best Hard Rock/Metal Performance, even though it’s neither a hard rock nor a metal album! This song is about the change in land usage, and the way in which farms, which have been in families for generations, are being lost, as they are being bought up to build freeways, airports and shopping malls. It’s not specifically about the situation in America, and I did think of calling it Farm On The Motorway. But somehow that didn’t have the same ring to it! “

“Again from Crest Of A Knave, this has been seen by some as being a very sexist song, when the opposite is true. It is actually about having respect for someone. It’s really about admiring someone in the same way that you would admire an exhibit in The Louvre… or even the loo! It’s a series of musical vignettes, moving from blues to classical to folk, and I like doing that.”

“From the Jethro Tull Christmas Album, and I think it’s the last track on which Doane Perry played drums. The idea came from the fact that my daughter’s birthday is on December 22. Maybe one in six people have a birthday one month either side of Christmas. And they so often lose out because they’re given combined birthday and Christmas presents. That’s just so unfair and lazy. I have always given my daughter separate presents for the two occasions, even though they’re only a couple of days apart. As I said earlier, we treat Jesus the same way. We forget about December 25 being his birthday, and get embroiled in all the consumption of Christmas celebrations. It’s a song I played in churches and cathedrals, and it is an uptempo kind of piece.”