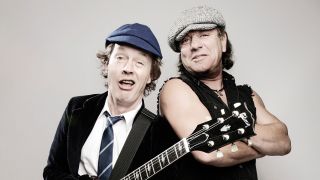 A simple, but heartfelt and moving dedication on the inner sleeve of Rock Or Bust tells in many ways the story of AC/DC’s two most recent albums. In full, it read: ‘And most important of all, thanks to Mal who made it all possible.’

It was just as they were set to release Rock Or Bust that AC/DC confirmed a long-gestating rumour that Malcolm Young was out of the band. Suffering from the advanced stages of dementia, a statement revealed he was receiving full-time care at an undisclosed location in Australia.

In fact, signs of Malcolm’s illness began to show when he and Angus Young reconvened, as was their practice, to swap the snatches of ideas each had separately compiled and start writing songs together for Black Ice. Little wisps of memory loss, which soon enough for him would cloud over into an impenetrable fog. That meeting went ahead in London in 2003, three years on from Stiff Lipper Lip, but it would be another five before Black Ice finally saw the light of day. It was put back by Cliff Williams suffering a serious hand injury and also the protracted negotiations that took the band from their previous label Elektra to Columbia Records.

It was March 2008 when AC/DC went back into the studio. For the ensuing two months, they holed up at the Warehouse Studio in Vancouver, Canada. No matter the protracted time apart, in most all respects their getting back together meant business as usual.

“The only surprise with AC/DC is how straightforward the recording is,” notes Billy Bowers, vocal engineer on both Black Ice and Rock Or Bust. “There are no tricks, no effects, just two guitars, bass, drums and vocals. There is a lot of hard work but also civilised breaks for smoking, tea, jokes and stories. And Angus’ s wife Ellen also made us all a lot of great food.”

There was, though, one significant change and it was no accident. Brendan O’Brien came to AC/DC fresh from producing a brace of hit albums for another of Columbia’s heritage artists, Bruce Springsteen. On The Rising from 2002 and Magic from 2007, O’Brien had injected new life and purpose into the E Street Band’s decades-old sound. He went on to repeat that feat with Black Ice.

An accomplished guitarist in his own right, O’Brien focused on the nucleus of AC/DC’s attack: Malcolm Young’s metronomic chugging and Angus’s fiery interjections. In particular, he paid attention to coaxing short, bursting hook lines out of Angus: the kind of flourishes he had shown off on Highway To Hell or Back In Black, but which had all but slipped from his repertoire. The album got an instant pay-off from O’Brien’s approach. Rock ’N’ Roll Train, a rousing call to arms, was the best opener to an AC/DC album since Hells Bells. The beat of the band was unmistakeable, but Angus’s fluid counter-leads gave it renewed impetus. AC/DC hadn’t sounded this fresh, this urgent in a quarter-century.

O’Brien pulled off a second masterstroke on Brian Johnson. Compelled to scrape at the upper limits of his range, Johnson had for years come over like a strangled budgie. Here, operating lower down his register, he grunted, growled and, yes, sung with the conviction of an old school soul man. Even the lesser songs on Black Ice were much better for that being the case.

“Brendan and I set Brian up in an outer office at the studio,” recalls Bowers. “We put a bunch of gear in this small room and had Brian stood right next to us listening through speakers instead of headphones. He would do a handful of takes and that would be it. The guy’s got a set of pipes that’s for sure.”

Time and again, Black Ice delighted and even surprised. Big Jack, jitterbugging, and Anything Goes, swinging, in turn brought to mind two of the venerable Back In Black’s staples, respectively What Do You Do For Money Honey and the joyous You Shook Me All Night Long. Angus’ slide-guitar on Stormy May Day temporarily relocated AC/DC to the Mississippi Delta. Best of all, both Decibel and the title track stirred up a tasty blues-boogie gumbo that recalled nothing so much as 1970s vintage ZZ Top – Angus blowing hot, blue and righteous like Billy Gibbons. Each was underpinned by the eternally stomping teaming of Williams and Phil Rudd. But as always, AC/DC’s pilot was Malcolm Young. Angus used to tell people his elder brother’s guitar was strung with barbed wire. But for all that he was tough and unyielding, there was also a heart and soul to Malcolm’s playing and this went to the very core of the band.

Not that Black Ice was all home runs. At 15 tracks and 55 minutes, it was too long and too reliant on the mid-tempo verse-chorus rockers that had become AC/DC’s default setting. However, with eight much better than decent tracks it had a higher strike rate than any AC/DC album since For Those About to Rock… in 1981 and it proved to be their most successful record since then too. Released on October 20 2008, it rocketed to No. 1 in 29 countries and had shipped six million copies by the end of that year.

For the following world tour, the band had to truncate their set-lists as Malcolm’s memory began to fail him. Rock Or Bust went ahead without him, but his presence hung over it like a shroud. It was, it could only ever be, half-formed, a ghost of a record. Left to shoulder the songwriting load, Angus went back to the store of riffs that Malcolm and he had stockpiled over the years. He managed to prize out a cracking opening one-two salvo with the title track and Play Ball. Hard Times was a diverting feel-good shuffle and Rock The House effectively repurposed Zeppelin’s Black Dog until falling at a ham-fisted chorus. But the rest of its eleven tracks had the feel of a reheated meal.

Filling in for his departed uncle, Stevie Young did a serviceable job, but there was the inescapable sense that the crucial cog was now missing from AC/DC’s engine. That where it had roared, it was now ticking over. The returning Brendan O’Brien over-compensated, beefing up and polishing their backing vocals to a Def Leppard-like sheen, which is to say that Rock Or Bust sounded like ‘Mutt’ Lange-era AC/DC, minus the essential element.

“Malcolm is and always will be the backbone of that band,” insists Mike Fraser, guitar engineer on every AC/DC album since The Razors Edge. “He is probably one of the best guitarists I’ve ever worked with – not flash, but so solid and with a great feel and sense of tempo.

“Even when you saw them play live, everybody on that stage would be watching Mal. The little guy in the shadows was the one who directed the band. It was the same in the studio and Mal would fire everyone up if he thought it wasn’t happening. Making Rock Or Bust was definitely bittersweet and his presence was for sure very much missed. Stevie’s a good player, but he’s not Malcolm.”

Of course, Phil Rudd, Brian Johnson and Cliff Williams have each since followed Malcolm out of the group. Certainly, neither of Black Ice, or even more so Rock Or Bust is faultless, but AC/DC’s last two albums are good enough to be what now they should: this great, timeless band’s valedictions.