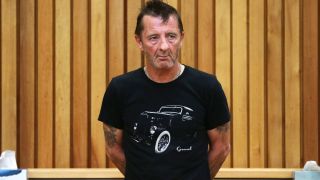 The trial of AC/DC drummer Phil Rudd for threatening to kill four people and possession of drugs is to take place next year, a judge has decided.

He wasn’t present at Tauranga District Court in New Zealand today as a plea of not guilty was entered on his behalf. He’s likely to face a judge-alone trial with no jury. Judge Tom Ingram ruled that a decision will be made in February. The media were ordered not to report details of the case.

Rudd, 60, was arrested last month and originally charged with procuring a murder before the accusation was dropped less than 24 hours later. He appeared at Tauranga High Court last week for a short but dramatic hearing, at which the case was sent down to a lower court since the most serious charge had been removed.

His status in AC/DC remains in doubt, with the band having insisted they’ll tour next year regardless of the results of his trial. Frontman Brian Johnson recently said: “I don’t think we have to do anything – fire him or anything. I think the situation is going to take care of itself.”

He was replaced by Bob Richards of Welsh blues outfit Buck And Evans for two video shoots in London in October. The band released 17th album Rock Or Bust yesterday – it’s their first without Malcolm Young, who was forced to retire as a result of dementia.