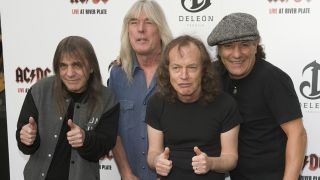 Malcolm Young fought to keep making music as long as he could, says brother and bandmate Angus.

The AC/DC mainman was finally forced to retire earlier this year as a result of dementia, which he began struggling with before the band started 2008 album Black Ice.

Angus tells the Pulse Of Radio: “He was still writing until he couldn’t do it any more. You were hoping that he’d get better.

“The physical side, he got great treatment for that, so he’s good with all of that. But the mental side has just deteriorated. He himself said, you know, ‘I won’t be able to do it any more.’”

Malcolm, 61, is receiving full-time care in Australia. He didn’t write any material for upcoming AC/DC album Rock Or Bust, and hasn’t even heard the final work – but he’s credited as co-author on all its songs.

Meanwhile, Angus and Brian Johnson have discussed the band’s relationship with their fans, with the frontman describing their followers as “members by default.”

Rock Or Bust is released on December 1. The band are planning to tour next year with Malcolm’s nephew Stevie Young in his place – but the status of drummer Phil Rudd remains uncertain after he was arrested and charged with threatening to kill, which could lead to a seven-year prison sentence.