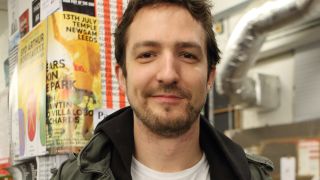 In 2013, I did quite a lot for Record Store Day. I have a feeling they called me an ambassador, or something like that, but what it meant was that I played something like 900 million in-stores and released a seven-inch for it. Though I wasn’t as involved last year and this year, it’s definitely something that I’m fully behind.

Record stores are an important corner of culture – and of my culture in particular – to celebrate. They may not serve the same function as they did when I was a kid – as the only place in town to get music – but there’s still a huge role for record stores to play in everyone’s lives. My favourite record shop is Banquet Records in Kingston on the outskirts of London. The shop serves as the centre point of an entire scene, it’s an incredible thing that Jon Tolley and the rest of them have built down there. As a result, a lot of international touring bands will now play London and Kingston now and it solely because of that shop and the things they’ve done to create a scene around them. That’s pretty fantastic.

Growing up, my local record store in Winchester was not quite the hip, independent shop you might dream of. It was an Our Price. But one of the guys working there got to know that I was interested in stuff on Epitaph Records and he would put things aside for me. Once I moved to London, I spent a lot of my life in Selectadisc in Soho buying records. Even if I was broke, I’d go in and flick through the racks and a lot of the guys in there were incredibly knowledgeable so I’d learned an awful lot of what I know about music from them. Some people think the staff behind the counter in record shops are intimidating – I never found that. I had friends in Selectadisc and always found them incredibly helpful.

I suppose there was once a time when record stores were more central to scenes than they are now – various genres have sprung up around record shops throughout the course of history. But it’s important not to get too dewy-eyed about that sort of thing. The internet has increased the opportunities for people to connect across the world and to discover things they never would have in the past and I think that’s pretty positive. But, yes, it would be a shame were record stores to completely die out.

There is a link between Record Store Day and vinyl releases, but as much as I think the vinyl revival is very cool I’m not really a vinyl man. I tour all the time and it would be mind-bendingly impractical to be buying records on the road or, indeed, carting them around with me. Having said that, there is nothing quite like holding up the 12-inch of an album you’ve made: they just look fantastic. I am a bit of a collector: to this day I own everything ever released by Kranky and Constellation Records, who are a Canadian post-rock label. I’ve got a few old, rare bits and bobs too: some Townes Van Zandt and also a Chas and Dave picture disc from the ‘70s which I love deeply.

I can’t say I was aware of Record Store Day before I got involved in it but I love how it has become a big thing now. I know that some people have complained about it getting bigger, or have worried that it has become more commercial: but the whole point of it is for record stores to sell records – and the more the better. Big labels have got more involved and some argue they’ve hijacked the day and use it as an excuse for putting out reissues – but people buy what they want to buy. I’m sure there are some cash-in reissues that are put out, but people moaning about that sort of thing is, for the most part, people looking for an excuse to moan. I find that slightly tedious.

Record Store Day is a great thing. It gets people into record stores where they buy and listen to music – and I think the world is a far better place for its existence.

Check out our buyer’s guide here and for more information on shops participating in Record Store Day, click here.

Frank Turner’s book, The Road Beneath My Feet, is out now through Headline.