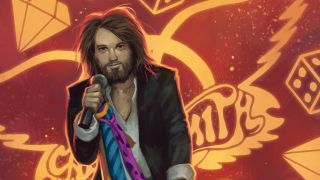 “I’ve always had a certain affinity with Aerosmith. It’s a connection that’s been there since before I can remember. They were the first band I ever heard… the first song I heard was Love In An Elevator, and since then they’ve been a great influence on me. Steven [Tyler, vocals] definitely influenced my life, and not just musically. He’s made an impact on my fashion style, my mannerisms and the way I talk and move, especially onstage. He’s a great man and everyone in that band is insanely cool. I spent years teaching myself to play guitar like them and the rest of my life trying to look cool doing it!’/o:p

THEY KEEP GETTING BETTER

“They’re absolutely timeless. Even with the last record [2012’s Music From Another Dimension!], some of it is completely out of this world. Their song Out Go The Lights is one of my favourite Aerosmith riffs of all time and it was only released a couple of years ago! It’s a phenomenal album and really underrated. It took two or three listens for me to fully take it in and I think a lot of people didn’t give it that chance, because there’s been a lot of those older bands that still try to make music and they’ve lost it. Aerosmith are one of those bands that are still kicking and screaming!”/o:p

STEVEN TYLER IS A KINDRED SPIRIT

“I’ve never actually met Steven! He and I were supposed to do an interview and photoshoot together one time, but he got called away for a rehearsal in the lead-up to their next tour. The photoshoot got rescheduled, but then I got called away for a tour myself. Then Aerosmith invited me down to one of their concerts, but I had no idea what to say because then I had a tour booked at the last minute and I had to leave that night. I was supposed to go an event he was doing in Los Angeles with Run DMC and I couldn’t get there because of traffic.

“Maybe we really wouldn’t get along, because we’d compete to be the biggest ego in the room. Or maybe we’d get along too well! We’ve both come off the wagon in a big way and we’d tear up the universe. If Steven and I had met in the late 70s, it would’ve been dangerous.”/o:p

“Back in the day, Aerosmith wrote their own fan mail and put bags of cocaine in there so they could take it on aeroplanes. The theory was that if the cocaine got found, you could say, ‘Wow, I had no idea that was in there – that’s just fan mail, I haven’t opened it yet!’ I’ve had tour managers search through my shit every tour after they found out that I knew that, just to make sure I wasn’t trying it myself!”/o:p

“As a kid, I had a harmonica like Steven. It’s something I’m picking up to employ on the next album. It’s a phenomenal instrument… it’s so versatile and so cool. There’s that view that it’s a child’s instrument, but you listen to it with Aerosmith and you think, ‘This is cool as fuck!’”

THEY’RE ALL ABOUT THE BLUES

“We have the same influences from the blues – you have those huge, drawn-out choruses and it’s a beautiful thing. It’s what they developed as a rock’n’roll blues band and I grew up on the blues. I love The Grind, from Honkin’ On Bobo. Not many people know about that record because it was all blues covers. The Grind was in the middle of them all and it blew me away the first time I heard it – it’s such a jam-a-thon!”

WE ARE HARLOT PLAY DOWNLOAD IN JUNE. THEIR SELF-TITLED DEBUT IS OUT NOW VIA ROADRUNNER/o:p