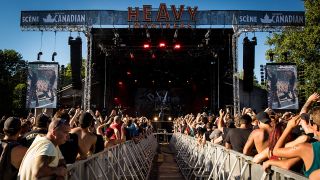 Next weekend, Canada’s premier metal festival, Heavy Montreal, returns after a year off. With a bill packing the likes of Avenged Sevenfold, Rob Zombie, Marilyn Manson, Gojira, Emperor, Baroness and much, much more, it’s boasting one of the best lineups of 2018 – but there’s plenty more reason to head to the Great White North’s biggest heavy music fest. Here are just a few of them.

It's back with a vengeance

After taking a year off from an increasingly packed North American festival scene, Heavy Montreal has returned with one of its best lineups ever. As well as solid gold heavyweights like Avenged Sevenfold, Rob Zombie and Marilyn Manson bringing enough anthems to fill a World Cup, there’s a monstrous amount of killer bands representing metal across all quarters. You want riffs? Have Gojira, Baroness, Sleep and Red Fang. Fancy something a big more extreme? How about black metal royalty like Emperor or grindcore innovators Napalm Death? There’s Between The Buried And Me bringing the tech, synthwave courtesy of Perturbator, and that’s before we get into Trivium, Eyehategod, Power Trip, The Black Dahlia Murder, Veil Of Maya, Asking Alexandria... look, it just slams, okay?

Rob Zombie and Marilyn Manson are currently tearing up North America on the second Twins Of Evil tour, and they’ll be stopping off at Heavy Montreal on the Saturday night. But where else on their run will you get to see the two certified metal legends alongside a supporting bill of some of the best bands in heavy music history? Exactly.

In fact, it’s a rare chance to see Emperor at all; since the black metal titans first reformed in 2013, appearances have been rare, and this is Ihsahn et al’s first gig in Canada whatsoever since way back in 1999. Chances are you won’t get a chance to catch them around these parts again any time soon, so don’t take it lightly. This is history in the making right here.

Alestorm might just bring the silliest festival set of 2018

Scotland’s finest pirate metal wallies have slowly but surely become one of the biggest British metal exports of the last ten years (we’re not fucking with you – Keelhauled has over 13 million streams on Spotify). Plus, live, they’re an absolute hoot. Playing a 45 minute set on the Monster Apocalypse stage on the Saturday afternoon should give them just enough time to cram in a boatload of swashbuckling anthems and cause complete pandemonium across the Parc Jean-Drapeau. Get the rum ready.

Gojira will be staking their claim as headliners

They’re already headlining the UK’s own Bloodstock in August, and with a sub-headline slot at Heavy Montreal on the Sunday night, you can bet Gojira will be making their bid to make a step up and becoming a legitimate festival headliner in North America. One of the best live bands in metal today will not be coming to play – don’t be too surprised if they’re one of the bands everyone comes home talking about.

From thrash metal slayers Havok to doom metal duo Pallbearer and Khemmis; from rising synthwave mainstay Perturbator to crushing groove metal crew Jinjer, Heavy Montreal 2018 is stacked with killer young bands looking to make their mark. Our prediction? We’re finding it hard to pick anyone that can step up to Power Trip right now, so back them to steal the weekend on the De La Foret stage on the Sunday.

Compared to most festivals, you’re much less likely to miss your favourite band at Heavy Montreal – the two main stages operate on a rotation system that means one band only starts when the next one finishes. Even the other two stages are timed in a way that enables you to dash around and catch pieces of different sets pretty easily – made all the more simple by what is a relatively intimately sized festival given the size of the bands playing.

When Heavy Montreal comes to town it takes over

The action doesn’t just stop at the festival itself. If you’re in town the night before, head to Foufounes Electriques for a special ‘Heavy En Ville’ gig featuring Miss May I, Archspire, First Fragment and more. There’s also an official Heavy Montréal Day 1 afterparty in the city, featuring a bonus set from Perturbator. In fact, Heavy Montréal presents gigs in the city all year round, with the likes of Black Label Society, Nothing More and Behemoth playing Heavy-curated gigs later this year. That’s dedication right there.

It's great value for money

At just $165CAD for the weekend (for the Brits among us – that’s less than £95 for all of the above!), you can see a host of the biggest and best bands in metal without breaking the bank – meaning that if you’re coming from out of town, you’ll be better placed to afford to spend a couple of days exploring the city. Which brings us to our next point...

Montreal is one of the best cities in the world

Not only is it super metalhead-friendly, with bars like Katacombes, Piranha Bar and Foufounes Electriques attracting legions of black-clad moshers all year round, but it boasts beautiful architecture across some genuinely gorgeous districts, tons of stuff to do, the friendliest people ever and, best of all, poutine. Lots and lots of wonderful poutine. Check out this handy Expedia guide on why it’s worth taking an extra couple of days around the festival to go and explore the city.

Heavy Montreal 2018 takes place July 28-29 at the Parc Jean-Drapeau, Montreal. Check out what else there is to do in Montreal other than mosh your limbs off.

This Metal Hammer feature is brought to you in association with Heavy Montreal.