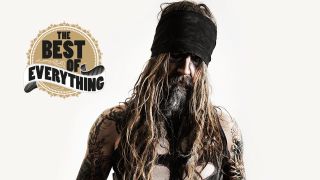 Rob Zombie’s a man with a taste for the ever-so-slightly dramatic, so who better to wade through his back catalogue and pluck out its crowning gems than Preston-based sextet Ward XVI? As you may gather from the video for their new single Cry Of The Siren – which you can check out at the bottom of the page – Ward XVI have built their sound upon a similar fixation with the weird and wonderful, merging bombastic symphonic electro rock with a heavy dose of creepy, overblown melodrama.

So, with that connection adequately established, we welcome the band’s frontwoman Psychoberrie and guitarist Dr. Von Stottenstein to share with us their best Rob Zombie songs of all time.

Psychoberrie: “Living Dead Girl is my absolute favourite Rob Zombie song. It’s got a slow groove that just makes it really sexy, it’s great to dance to and I love the Middle Eastern section in the middle. Plus, the vocal melody is extremely catchy. I love watching Rob Zombie perform this song live; I just love the way he moves to it. It’s absolutely awesome and I find myself making a pathetic attempt at trying to mimic his dance moves whenever I hear it on a night out, which is usually when I’ve put it on the Jukebox.”

Dr Von Stottenstein: “Death Of It All is one of my favourites, mainly as it veers from his renown bouncy, energetic electro-metal vibe to a more sedate and somber tone. The song starts with a melancholic acoustic guitar, which evokes a lonely atmosphere that at certain points throws you off kilter with an unexpected minor note or two. Then the drums kick into an almost Tim Burton type swing and beat – it makes me picture someone limping alone along a desert road, occasionally tripping. The vocals compliment the song, restrained to a Jim Morrison type whisper. This isn’t the normal stereotypical Rob Zombie vibe, but it still has all of his creativity and sinister, haunting atmospheres abundant in the production.”

Dr Von Stottenstein: “I can’t say anything about this song without also talking about its awesome video. I’ve always admired the way Rob Zombie’s videography compliments his songs and gives them an almost schlock horror/Hanna-Barbera ‘groovy ghoulies’ 60s vibe. I think his music and vocal style of pseudo hip-hop-meets-metal compliments the funky groove metal riffing and sets it apart from Pantera who were also pioneering this in the early 90s. It’s in the similar ‘groove’ genre, but you couldn’t say that they were ‘ripping Pantera off’, either. It’s also more energetic and powerful than what the Chili Peppers were doing. Whether as White Zombie or as Rob Zombie, these traits have remained consistently familiar, but diversified as well.”

Dr Von Stottenstein: “This song winds up with with a synth that slowly raises in pitch to a crescendo like a siren, which then hits the drums at its peak. Supported by an ace guitar riff and synth, which build an atmosphere of impending danger, this song reminds me of being a teenager in the metal clubs and everyone going mental to the tribal beat and chanted chorus, everyone bouncing in unison. Of course, it also has his trademark haunting effects in the production, thrusting the song like a train steaming along the tracks towards a cliff.”

Psychoberrie: “This song totally gives me the creeps. I love the mix of sounds used to create a sense of unease; the Southern rock guitar with the piano and horror synths in addition to samples from the movie. This is one of my favourite pieces of work by Rob Zombie. When I listen to this song, I feel evil – it’s so sinister. His vocals are very repetitive, but it gives the song a brainwashing effect that leaves you in a trance. I once read an interview with Rob Zombie where he said something along the lines of “I don’t believe in glorifying horror, it should be disgusting, it should make you feel sick”. I think this song is a good reflection of that. The Devil’s Reject is by far my favourite movie, but this is my favourite soundtrack.”

Psychoberrie: “This is one of my favourite songs to listen to live. I can’t listen to this track at home without hearing the crowd shouting “Scum of the Earth!” It puts me right back in the crowd whenever I hear it.”

Rob Zombie - Trade In Your Guns For A Coffin (Venomous Rat Regeneration Vendor, 2013)

Psychoberrie: “I love the sleazy old-school rock’n’roll sound that this song has, but most of all it’s the controversial lyrics, particularly ‘Stay asleep and watch TV, be happy’. That perfectly sums up the majority of modern day society. People don’t like truth, they’d rather be ignorant and just be entertained. The funny thing is that some people probably bop along to this song without any clue as to what it’s about, and that for me makes it extremely clever.”

Psychoberrie: “It wouldn’t be right not to have this song on the list, as this is the reason I went and bought Hellbilly Deluxe. The chorus is so catchy and I love the way the guitars complement the synth. The music video to this song is one of my absolute favourites of all time. It’s so trippy, and a lot of fun.”

Dr Von Stottenstein: “This track starts with an ethereal soundtrack, like you’re listening in to the other side of reality. The song then descends to the dancy, melodic groove-laden vibe that Rob Zombie’s so well-known for. His vocal delivery adds to the urgency, to follow the beat like it’s pulling the drum beat along with it. The synth he uses always adds a twist to his music that lifts it beyond standard metal songs. It creates a bizarre side to what otherwise would be quite a standard metal riff.”

Psychoberrie: “Feel So Numb. This song is totally catchy. The opening guitar riff first caught my attention, but it’s the catchy chorus melody that got me hooked. This is a good sing-a-long tune. I love the EBM beat and electro synths which then merge into a hard rock, punchy chorus.”

Ward XVI’s new single Cry Of The Siren is out on 9th Feb, but you can check out the new video below:

"I was so high my doll started talking to me": The confessions of Rob Zombie