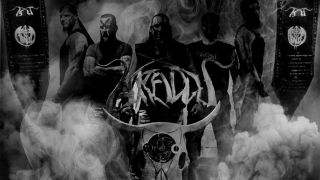 Playing alongside the likes of Behemoth, Mayhem, Satyricon, Enslaved and Marduk in their home country of Isreal, Arallu have been slowly but surely making a name for themselves in the twenty years since their debut studio offering back in 1999.

With their previous album 2017's Six, the band saw a peak in their success this far, and it's about time. Their unique sound incorporates traditional Arabic Middle Eastern instruments such as the saz (or bağlama), oud, kanoon (or qanun) and darbukka (or Egyptian goblet drum), into thunderous blackened death metal.

Incorporating native instruments and folk sounds has a long tradition within black metal, since the early days of Bathory and continued with the likes of Primordial, Moonsorrow and Windir. With the scene having been established in the west and with many bands still claiming distinctly European ancestry, it's usual to hear the influence of Celtic and Nordic music. Yet their is a vibrant and long-established black metal folk scene further east too – most notably headed up by fellow Israelites, the Assyrian/Aramaic blasphemers Melechesh – and it's been picking up steam across the globe, with Arallu's very Eastern take on the genre a welcomed addition to the cultural kaleidoscope of extreme metal subgenres.

The band's most recent release, En Olam (Hebrew for "There Is No World") describes, through lyrics, the fear we all live and feel – a fear that is particularly prevalent in mastermind and founder Moti "Butchered" Daniel's home of Jerusalem. Butchered channels the rich and ancient spiritual history of the city where bloodshed and violence remain a very constant and very real threat, through his impassioned lyrics that glorify those who never surrender to terror and resist the fundamentalism that is prevalent and questions the very fabric of our perceived reality.

Check out the band's latest single, The Center Of The Unknown, below:

Arallu's seventh studio album, En Olam is out now on CD and Vinyl via Satanath Records and available to buy on MP3 here.