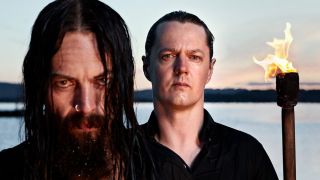 Satyricon have long been one of black metal’s torchbearers, and this year they made their triumphant return to the frostbitten stage with new album Deep Calleth Upon Deep – the first new music since frontman Satyr was diagnosed with a benign brain tumour two years ago. It’s a bold record and one that stands up as one of the best extreme metal releases of the year, reaching number 22 in Metal Hammer’s Top 100 Albums Of 2017.

We caught up with Satyr to talk about the new record, how he’s feeling and what else is going on in the life of the wine entrepreneur.

What has the reaction been like to Deep Calleth Upon Deep?

“It’s been very good, but I’m unconcerned; I try to fulfil my own ambitions based on the vision I had for the record. I’ve worked tirelessly to achieve them. When you finish, there’s a bit of emptiness – writing it consumes you, in this case almost three years, and for me it’s about being able to look in the mirror and ask, ‘Have I done everything I possibly could to make this record everything it is?’ If the answer is yes, you can let go. Even if people didn’t like it, it would still be the same record to me.”

After commemorating Nemesis Divina’s 20th anniversary, did it feel good to return with some new blood?

“We had other projects running alongside Deep Calleth Upon Deep: our cover album Formative Oddities, and the time-consuming release of [2015 live album] Live At The Opera. I decided there were too many projects running alongside, so we shelved the covers album. It’s going to happen somewhere down the road, in a year or two. With Nemesis’ influence, we felt it was important to do something, and I think those other projects we had on the side were helpful because they highlighted what I wanted to do more and less of. I closed some doors and opened some new ones.”

How have your recent health troubles (Satyr was diagnosed with a benign brain tumour in 2015) affected your writing process/the band?

“It’s provided a new perspective on certain things and some sort of sense of urgency – it’s hard to tell how long I could have left doing this – I don’t anticipate the end of Satyricon anytime soon, and I’m doing rather well, but I’ve learned that you always think to yourself that as long as you feel inspired and motivated, then you can keep on doing it, but then all of a sudden you realise there could be other things in life that decide for you. You’re young and strong, then shit hits the fan, and you think, ‘What just happened?’”

What was it like launching the record by playing it in full on top of the high KLP building, in your hometown of Oslo?

“It was a good way to get started. On the past two or three records, we’ve had listening parties. We haven’t really been a band that have played release parties, but this time around the opportunity came. That whole district of Oslo is largely associated with business, but they’re trying to get more arts and culture coming in. They said, ‘You can use our rooftop’, so for us, it was a good opportunity to do something a bit different.”

How has your wine business progressed this year?

“It’s been the best year since I started Wongraven Wines in 2010. A lot of people think it’s a fun thing on the side, and they’re right, because that’s how it started, but today I sell more wine in Norway than most wineries sell worldwide – and I don’t even do it full time. It’s testimony to the good work of all those I work with. I have a deep and sincere passion for it. In the beginning, wine producers were clueless to what being the frontman of Satyricon entailed – it took a considerable amount of time to make them understand!”

What’s the best piece of advice you’ve had this year?

“That’s a good one! My wife reminded me during a conversation when I was really tired of some of the things I was working on, and getting really pissed off honestly! She said to remember to differentiate between what is a problem and what is a result of me being angry! That’s a good reminder. Sometimes you’re so deeply into something that when things don’t turn out exactly how you wanted, it pisses you off; but it’s worth remembering the problem isn’t that big.”

What do you think about the state of the world this year?

“What I’ve been thinking the most is about everything I felt during the making of the Age Of Nero in 2007 and 2008. I thought to myself, ‘We’re living in a dark age – ultimately, what will be known as the beginning of the end. What I felt back then has unfolded over time, and I think what you see when people elect leaders that you could never imagine being leaders of the free world… I question where we’re heading with all this. I can’t say I walk around in fear, but I’m not too optimistic on behalf of mankind.”

The metal bands who slayed in 2017