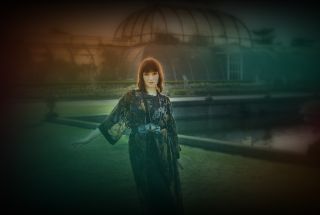 If you’ve heard Lindy-Fay Hella sing with Wardruna, you’ll already know that whatever forces she’s calling upon, not all of them are rooted solely in this earthly plane. Her recent solo album, Seafarer – released last September on Ván Records – revealed not only a host of captivating new facets, but a sensibility as mercurial as it was deeply personal.

Forever roaming it uncovered states of rapt, wistful wonder flourishing at the peripheries of folk, electronica, and whatever musical maps you’ve traditionally navigated by.

That Seafarer sold out its first pressing, suggests the album resonates across all kinds of music boundaries, and whether you’re new to the vast, emotionally rewiring universe Lindy-Fay has created, or need another opportunity to step back in again, we are honoured to offer a way in, with a stunning new video for the song Two Suns.

Featuring the singer in various, trip-inducingly hued natural environments, it is perhaps one of the most delicate songs on the album, but the fragility of Lindy-Fay’s voice becomes the starting point for a journey that will bedazzle and beguile anyone who ventures into its off-kilter yet organically rich world.

So without further ado, lose your bearings to Two Suns, and scroll down for Lindy-Fay’s own commentary on the song and the making of the video!