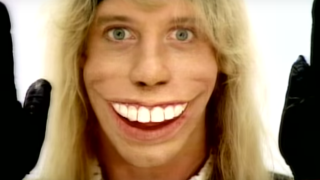 It’s 1990. Grunge is but a mere rumble heading from Washington State. Hollywood five-piece Warrant can’t hear. They’re too busy having a good time. But wait, their label’s president want a hit for their second album. No problem. Their vocalist Jani Lane (RIP) writes a fairly obnoxious ode to pudding in just 15 minutes.

It needed a fairly obnoxious video to match. So much so that MuchMusic in Canada refused to air it because it was “offensively sexist”. But was it really?

This is what a panic attack in the 80s felt like.

For a song about baked goods, Warrant seem pissed off about, I dunno, a burned lattice or something.

Here’s Bobbie Brown. She appears to be trapped in a wind tunnel.

The band are playing on a giant clafoutis – one for the dessert fans, there.

Note drummer Steven Sweet’s raised eyebrows. Is he petrified of stone fruit or pastry? Or both? What an ordeal.

Watch Warrant’s Joey Allen play his guitar in an unconventional manner. The nimble-fingered maverick. Saying that, the bolts on the back of his guitar may scuff his PVC trousers. That explains it.

Look at that health and safety nightmare.

Look at that polka dot nightmare.

A reference to baseball. How big is the person wearing the catcher’s mitt?

Ask any drum tech worth their salt and they’ll tell you that if you replace your rack toms with cherry pies, they’ll sound like shit, fancy mic or not. Same goes for performing a flam on an open sandwich. People were really keen to experiment in 1990.

There’s Bobbie posing on a massive pair of lips next to a mock-up of Grant Wood’s American Gothic painting. What could it mean?

“I mixed up the batter and she licked the beater” You don’t get that on Great British Bake Off.

There’s no need for that.

Alright, we see what you’re doing with the hose.

It looks like a couple of people are enthusiastically testing the car’s suspension. Or, judging by her facial expression, she’s found that expensive eyeliner that she bought two months ago and promptly lost. Remember? She wouldn’t stop going on about it.

Joey cries after viewing a dancing woman through pair of binoculars. Maybe he’s realised it may come off as a little creepy.

Jani’s about to make sweet, sweet love until her dad wanders into the room. That could’ve been very awkward. But not as awkward as wearing a cap during sex.

Before the worldwide web became a thing, there was the ol’ fashioned ‘Warrant Woman Wash’. It was said to be as bracing as a brisk walk on a winter’s morning.

Those teeth are ridiculous. Imagine trying to say ‘sexy strippers on Sunset Strip’ with those chompers.

A bit of light-hearted relief after all that dramatic tension. But will it hit Jani in the face? Don’t be daft.

What did we learn from Cherry Pie?

If you fired-up this bad boy expecting tips on whether using tart or sweet cherries make the perfect pie, you’ve come to the wrong place. However, if you’re after something elderly people describe as ‘saucy’ featuring footage of glamorous men dicking about with a hose, Warrant’s 1990 video cannot be topped. Hint: tart cherries often work best – and a teaspoon of brandy will give it a pleasant warmth. Serve with whipped cream and a blast of hairspray for retro ambience.