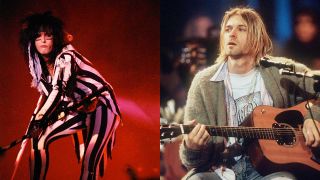 As the eighties tiptoed gingerly into the nineties, Los Angeles was nervously looking north towards Seattle. One type of rock was on the wane, another on the rise, it all came to a very ugly head, and the bickering and recrimination hasn’t stopped. So we’ve decided to settle the argument for once and for all: What’s best? Hair Metal or Grunge?

Dave Everley: Let’s get this straight from the start: there’s no such thing as hair metal.

That phrase was a snide, sneering retro-fitted jibe deployed by smart-arsed grunge bands and hip journalists who were too embarrassed to admit they’d once grooved to Ratt, Kiss and Guns N’ Roses just like the rest of us. But at the time, before this Stalinist cultural revisionism kicked in, it was called glam metal or even – oh yeah! – cock rock. But hair metal is the one that stuck. Damn it – we’re reclaiming it right now. Hair metal it is.

Hair metal was everything great music should be. It was fun, it was frothy, it was made for partying. It was the soundtrack to a decade-long good time. One listen to Mötley Crüe’s Girls, Girls, Girls and I’m right back at Rock City on a Friday night in 1987 by the time the first throaty rev of the motorcycle has faded. On that dancefloor, in a fug of dry ice and hairspray, everyone was a rock star. Outside, the drizzly streets of Nottingham were gone, replaced by the steaming tarmac of the Sunset Strip. Good times, my friends. Good times.

Like all the great scenes, hair metal had an in-built expiration date, even if no one realised it at the time. Sure, grunge ruined the party. Fine. Well done for shitting in the punchbowl. But what did they replace it with? Grumbling and heroin, that’s what. Don’t know about you, but that ain’t my idea of fun.

What do you think bankrolled Nirvana anyway? Appetite For Destruction, that’s what – without the millions Axl’n’Slash made for Geffen, an entire generation of teenagers would still be beating off to pictures of Lita Ford and Lorraine Lewis from Femme Fatale in the bedrooms of their parents’ house. And what do you think inspired Geffen Records to pick up Guns N’ Roses? The unavoidable, unplanned success of Mötley Fuggin’ Crüe, that’s what. Nikki Sixx invented Kurt Cobain, and that’s a fact my plaid-wearing friends (And yeah, cheers for that Nikki…)

The problem with grunge isn’t the music. Get past all the shower-dodging junkies moaning about how much they hate being famous and there are a handul of classic songs. Pearl Jam’s Alive, Soundgarden’s Rusty Cage, Nirvana’s Smells Like Bleedin’ Teen Spirit, that Alice In Chains song where he’s moaning about his piles playing up. Well… I say ‘a handful’. I mean four.

No, the problem with grunge was its sheer hypocrisy. Every single grunge musician who ever pulled on a plaid shirt has owned a record by a hair metal band. Every. Single. One. Of. The. Bastards.

Exhibit A: Alice In Chains, who used to call themselves Alice N’ Chainz and spent much of the late 80s rocking a look that suggested they’d launched a full-on thermonuclear attack on the make-up counter at Boots.

Exhibit B: Pearl Jam guitarist Mike McCready was a fully paid-up member of the Kiss army. And by the looks of some of the photos of him from the 80s, he shared a hairdresser with members of Skid Row. And talking of Pearl Jam, was any band of the late 80s more ‘hair metal’ than Mother Love Bone, the ‘grunge’ band that spawned them? Don’t bother arguing. The correct answer is ‘no’.

Exhibit C: Kurt Cobain, grunge ubermensch. And what was his first gig? Was it The Stooges? Patti Smith? No, it was Sammy Hagar, future singer with hair metal frontiersmen Van Halen. Party on, dude!

Thing is, the hair metallers might have largely been a bunch of half-witted bozos, but at least they were half-witted bozos with a weird kind of integrity, which is more than can be said for anyone from Seattle who weren’t called Queensryche. Plus they were a hell of a lot more fun.

OK. Think of it this way. Yes, it’s easy to laugh at Poison or Winger – hell, they can even laugh at themselves these days – but hair metal survives without anyone’s permission in 2015. There’s Rocklahoma, there’s new bands like Biters and H.e.a.t, hell, there’s Steel Panther, who are almost as funny a proposition as W.A.S.P were back in the day.

And grunge? What is the great legacy that this supposed cultural revolution left us? Who are the biggest, most popular, most untouchably popular band to have been influenced by the grunge explosion?

Chew on that, ‘grunger’. Now where did I put that Bang Tango record?

…dressed in flannel shirt and combat shorts, Online Editor Fraser Lewry makes the case for the revolutionary brilliance of Grunge.

I fought in the hair metal wars, and I fought hard. I saw Guns N’ Roses at the Marquee and Mötley Crüe and Bon Jovi at The Dominion. When Crüe brought the Theatre Of Pain tour to the UK, I followed them up and down the country, waiting at stage doors after shows and sleeping at empty train stations after hours. I had a fringe that made it all but impossible to see, wore fishnets on my arms, painted my nails bright pink, and slapped yellow and black strypes on my baseball boots. My hair fell in lustrous, golden ringlets, and for a while I sported a top hat. I may have looked like a transvestite ringmaster, but I was fully committed to the circus.

It didn’t last. Appetite For Destruction came along, shit got very real, and suddenly there was a benchmark. This was an album so combustible — and so fury-filled, and so brilliant — that everything in its immediate wake seemed silly, while most of what preceded it was rendered utterly trivial. Suddenly, there was more to life than big girls’ blouses and hairspray and Hollywood hot tubs. Have you seen the second Decline Of Western Civilisation movie? Most of the “hopeful” musicians on show think they’re having the time of their lives, but they’re clearly lost, and they’re lonely, and it’s tragic. Most of them probably ended up making decent grunge records.

Because that’s the thing: the best rock’n’roll has often come from the tormented, and the abandoned, and the angry, from Jerry Lee Lewis to the MC5, from Black Flag to the Gunners. Whereas most of the hair bands seemed trapped in a hopelessly juvenile world where nothing really mattered apart from finger-tapping and back-combing and banging on about sleeping with hot chicks at wild parties using increasingly laboured metaphors. Which is great if you’re 15, but doesn’t fit so well as you stumble towards adulthood.

Grunge meant we could grow up. Kurt Cobain may have come across like a sulky teen, but he lived in the real world for at least part of the day, and regular folk could relate to the subject matter. Best of all, he did it all with a band who sounded like Black Sabbath playing the Beatles, and the civilisation where that combination doesn’t sound amazing hasn’t yet been discovered. Kurt may have been unhappy, but Nirvana were a joy to behold, an absolute riot. Soundgarden gave us a singer who could almost out-Dio Dio, Pearl Jam wrote anthems that filled arenas yet really mattered on a personal level (I doubt anyone’s fragile teen confidence was ever bolstered by listening to Smashed Gladys or the Cycle Sluts from Hell) and Alice In Chains rocked like a wildly sinister, punkish combination of Led Zeppelin, Deep Purple and The Doors. Even the bands you’ve never heard of are brilliant. Try Starfish’s Stellar Sonic Solutions. It’s ferocious, and filled with the kind of fiery rock songs the inhabitants of Sunset Strip would have killed for, yet it sold about 23 copies. Seriously. Try it. An avalanche of shit-rock followed, of course, but that’s the way of things. Blame the record companies.

A good number of metal fans still labour under the misapprehension that the genre was somehow killed by grunge. It’s simply not true. In reality, 80’s metal was almost killed by its best album, Appetite, then rescued by grunge. Yep, Seattle was the saviour. Grunge opened our eyes and allowed us to explore the world beyond Madame Wong’s and The Troubadour. Grunge stripped away the flab and the fat. Grunge allowed us to put away childish things. Personally speaking, Grunge meant I could stop dressing like a brain-damaged prostitute and go back to my real clothes. For this — and for demise of Warrant, I suppose — we should always be grateful.