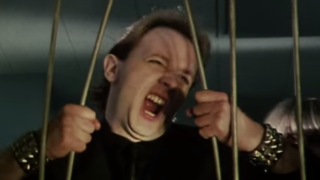 Rob Halford: someone's been to the gym

This week’s Video Breakdown turns its attentions to Judas Priest’s classic promo for Breaking The Law.

The video – directed by Julien Temple (The Great Rock N’ Roll Swindle, that Metallica Glastonbury hunting film) – sees the band rob a bank in London’s Soho before speeding off down the A40 with their loot…

Two men, both dressed as the witchfinder general for some reason, are sat in the world’s most depressing park feeding pigeons. They’re carrying guitars. Look at how bleak everything is. No wonder people drank lots of beer.

There’s a security guard asleep at his desk. If you want to rob a bank, it appears that 1980 is the time to do it.

A very young Rob Halford scowls his way down the motorway in an open-topped car. He looks annoyed. Is he disillusioned with life in 80s Britain? Or is it because the wind is blowing his hair around willy nilly?

With a shake of the head, you can tell he thinks driving with the top down was a mistake. He’s basically chewing his fingers off in anger.

The shifty guitarists and Halford convene outside what appears to be a bank in that London.

A loud noise rouses Ian Fitzgerald from a daydream. He’s bought new glasses and seems quite pleased with them.

Three robbers burst into the bank. Two of them are brandishing guitars. Shit! Someone’s going to get a sweet power chord to the dome, son.

Ah, the security guard has woken up. Nice of you to join us.

Despite having no amps, their guitars appear to be, and we’re using the technical term here, ‘loud as all fuck’.

Ian Fitzgerald is screaming. Not in fear, but because he’ll have to get those lenses replaced. If he ever gets out of this bloody rock heist alive, that is. He’s probably quite close to retirement as well. Not now, for the love of God, not now.

The Metal God admonishes the customers, while sitting on his haunches. Remember when you had to actually go into banks to do stuff? It was a different time then. Now, he’d be screaming at someone while they jabbed mindlessly at an app.

Sue Cuss, going for a high five with Halford, despite hiding behind bulletproof glass.

They’re crawling through the bank tellers’ windows now. There’s no way you could do that now. Most of them have a blind down these days, anyway. You’re lucky if anyone’s there at all. We blame robots.

The security guard clearly doesn’t give a fuck, hidden away in the safety of a back room.

With a power chord, the bank’s vault is opened with zero structural damage. Halford’s in first. There’s a chap who knows what he wants. He opens the bars a little too easily.

That’s what they were after, a gold disc for British Steel. We’re sure they could have made an appointment and just collected it without all this faffing about with guitars and fear.

Halford waves his shiny disc around. It feels like he’s rubbing his rock star lifestyle in the faces of those who have to do normal stuff, like be an extra on the set of a British heavy metal video.

They’re making their escape. Maybe an open-topped car might not be the best choice of a getaway vehicle. Plus, we all know what you look like. They could’ve worn tights on their head or, better still, made that appointment with the bank manager. I suppose it’s a bit of a trek from the midlands.

The security guard is seen brandishing the worst cardboard cutout of a guitar we’ve ever seen.

He’s playing the fake guitar like he’s never even heard music in his life, while the video cuts to Judas Priest driving fast with the wind in their hair. The police have no chance of catching them now.

We’re not sure what’s more annoying: the security guard or the shape of that cardboard guitar.

The band drive off into what passed for a sunset in 1980. The end.

What we learned from Breaking The Law

In 1980, it appears to be quite easy to rob a bank and remain unchallenged by the police. Being a security guard seemed easy then. You could sleep during your shift and dick about when shit got real. No wonder Thatcher was a thing then. Broken Britain, indeed. Good on you, Judas Priest. You did what you had to do.