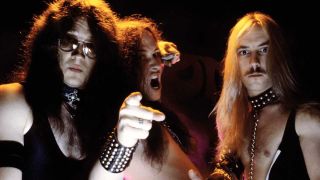 "I know loads of people who’ve said, ‘It must have been crazy back in the early 80s when Black Metal came out and everybody went wild!’” cackles Venom leader Cronos today. “But I was still getting on the bus with my amp and I was still be being told to fuck off by the bus driver.”

Not many bands can claim to have inspired an entire subgenre. But then not many bands have ever scared the living crap out of everyone like Venom did back in the early 80s. Erupting out of the North East of England with their debut single In League With Satan in 1981, the band – comprising singer/bassist Conrad ‘Cronos’ Lant, guitarist Jeff ‘Mantas’ Dunn and drummer Anthony ‘Abaddon’ Bray – gatecrashed the flourishing New Wave Of British Heavy Metal scene, armed with the ugliest heavy metal onslaught ever committed to tape and a shitload of censor-baiting Satanic imagery.

The band’s debut album, Welcome To Hell, emerged in 1981 to a mixture of critical acclaim and outright disgust. If nothing else, when Venom hit Impulse Studios in Newcastle to record their second album, Black Metal, they were still young, skint and itching to prove themselves.

“People might think we were living the high life, but it was shit,” spits Cronos. “Nobody understood our logo. Nobody understood the music. Nobody wanted anything to do with us because we weren’t pretty and we didn’t sing nice poppy songs. We weren’t like Deep Purple or Iron Maiden or any of those nice little bands that you could play to your mam, you know?

"It wasn’t, ‘La la la I’m in a rock’n’roll band!’ It was, ‘Fuckin’ hell I’m gonna kill you, you twat!’ Everyone was scared, mate. Because a lot of the population are sheep and they’re scared to say they like something until someone else says they like it.”

Cronos joined a nascent Venom in 1979 as a guitarist, eventually taking over as bassist and then vocalist following the departure of the brilliantly named Clive ‘Jesus Christ’ Archer the following year. In a stroke of good fortune for all concerned, he was also working at Impulse Studios, which doubled as headquarters for NWOBHM label Neat Records.

With their frontman’s foot firmly wedged in the door at Impulse, Venom wasted no time in recording their rapidly expanding repertoire of hellish anthems, making that first single and numerous demos along the way. When Neat Records saw how well In League With Satan was doing and realised that people might actually like this horrible racket, one batch of demos, recorded across three days, were hastily bundled together and released as Venom’s debut album, Welcome To Hell, in 1981. For album number two, Cronos felt a slightly more measured approach was required.

“It was either release Welcome To Hell as it was or not get the album deal with Neat, because they weren’t going to give us any more studio time,” says Cronos. “But because the first album was doing OK and getting really good reviews in the mags and selling a lot more than any of the other bands on the fuckin’ label, I was able to say to Neat, ‘Look, we need more than three days this time!’ They replied, ‘Right, you’ve got twice as much time!’ So it was seven days. We recorded it all in six days and then I mixed it down on the seventh, like a Biblical thing! Ha ha ha!”

Having achieved notoriety in the UK and beyond with their rugged and militantly raw debut album, Venom could easily have repeated the trick. But even though Black Metal can hardly be accused of being sophisticated or multi-layered, it does capture the sound of a band relishing the opportunity to be bigger, badder and more over-the-top than ever before. From the scabrous hiss that heralds the start of the opening title track, Black Metal was Venom exploring the possibilities of their own, nefarious invention and giving it a name in the process.

“I’d been calling us ‘power metal’ for years and we’d been through all the others, thrash metal and all of that, and then I thought, ‘Black metal! That’s us!’ It summed up everything.” Cronos grins.

“So I wrote the song Black Metal to deliberately be like… there you go, wallop! But I wanted there to be more to that album. I didn’t want it to be another album of three-minute bashers like Welcome To Hell. I wanted to show that we had other, more theatrical ideas.

"I always remember [Van Halen vocalist] David Lee Roth saying that when you see a band live you have all these visuals in front of you, so the music can be a lot more basic. But when you come to make an album, there has to be that something extra because there are no visuals. You have to create more sound to satisfy the ears because the eyes are being given nothing to go on.”

Lodged prominently on Black Metal’s first side (this was the era of vinyl and cassette, lest we forget), Buried Alive was the album’s most adventurous piece: a grim, grinding horror story about a premature funeral, embellished with DIY sound effects and Cronos doing his very best impersonation of a mumbling priest.

“I brought in mud, cardboard boxes and a couple of spades,” remembers Cronos. “The stairs up to the studio at Impulse were big stone steps, going up three or four floors. One floor down from the control room, we put the box down, put a mic inside the box and tipped all the mud on the stairs. Then we got the spade, the engineer Keith Nichol shouted ‘Go!’ and I started chucking the mud onto the box…”

As primitive and improvised as it was, Buried Alive’s creepy atmosphere remains one of Black Metal’s key moments: the looming spectre of death, thoughts of terror and a faint hint of mischievous blasphemy, it’s almost a blueprint for the 90s black metal scene’s entire aesthetic and ethos. Back in 1982, however, Venom were really just dicking about.

“I did the vicar’s voice and then we needed some background mourning sounds because it sounded too bare,” Cronos notes. “So we got everyone in and we all stood around one microphone, trying to make little whimpering, crying noises. But it sounded fucking stupid!

"So someone came up with the idea of sniggering and laughing instead, like you’re holding in a laugh because you shouldn’t be finding something funny, you know? So we did that instead and it sounded fucking amazing. So the background noises are all of us fuckin’ laughing. It’s amazing how shit works, isn’t it?”

While the rest of Black Metal was somewhat less cinematic than Buried Alive, the now-legendary likes of Countess Bathory, Heaven’s On Fire and To Hell And Back did suggest that Venom were evolving and growing in confidence. It was also more than apparent that Venom were upping the ante for heavy metal, making it infinitely more extreme, menacing and – despite Black Metal’s many shout-along hooks – wholly unacceptable to mainstream ears.

In effect, the very notion of ‘extreme metal’ began in earnest when Black Metal hit the shelves on November 1, 1982. Adorned with Cronos’s now iconic artwork, which he created “using black pens and Tipp-Ex”, and a newly re-tooled logo that was spikier and more menacing than its predecessor, it plainly wasn’t destined to be a major chart hit.

Instead, Venom released something dark, brutish and malevolent into the atmosphere that day, inspiring a generation of bands to drag metal deeper and darker into Hell’s depths.

“Everyone was sounding very different from each other and that was more exciting to me. Nowadays, when I look at bands like Dimmu Borgir, Immortal and Behemoth, I love it, because they’ve taken it to the point that we couldn’t back then, even if a lot of the music sounds the same to me.

"If we’d done any of that stuff back then, I think the government would’ve had us fuckin’ silenced! Honestly, people would’ve thought it was the end of the world.”

From direct descendants Hellhammer and Celtic Frost and the Norwegian scene of the early 90s to thousands of fervently pro-Lucifer contemporary bands, anyone and everyone that embraces metal’s dark side owes a debt to Black Metal and its unforgettable rallying cry of ‘Lay down your soul to the gods rock and roll!’

The classic Venom line-up would manage only two more albums before disintegrating amid booze-ravaged acrimony (and yes, they did later reform on more than occasion), but they had already made the kind of juddering, unmissable impact that lasts forever.

“We knew we’d made something special. The whole band were arrogant as fuck about that album!” Cronos concludes. “We felt that we’d put down the best record we could. I’m still really fucking proud of it.

"We were on a mission, heads down and going at it like fucking lunatics. We wanted to shove the album down people’s throats. When people said, ‘Wow, this is amazing!’ I remember thinking, ‘Yeah, of course it is! What the fuck did you expect?’”

Venom’s latest album, Storm The Gates, is out now via Spinefarm and their 40th anniversary deluxe vinyl box set is also out now via BMG records