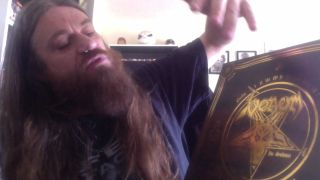 The almighty Venom are possibly one of the most influential bands to emerge out of the British Second Wave of Heavy Metal. Their obscene satanic imagery and hard and fast approach to playing made them the most extreme band of their time, with their first two albums proving to be a huge inspiration to the subsequent sub-genres of thrash metal, death metal, and of course black metal – named for their seminal second album, Black Metal.

This year marks 40 years since the band's formation in Newcastle upon Tyne, England. The occasion is being marked by the release of In Nomine Satanas, a deluxe box set available in both CD and vinyl formats featuring the first four studio albums and one live album originally recorded by the band's classic line-up of Cronos, Mantas and Abaddon.

The five albums, their groundbreaking 1981 debut Welcome to Hell, 1982's Black Metal, 1984's At War With Satan, 1985's Possessed and Eine Kleine Machtmusik, the 1986 live record of their performance at Hammersmith Odeon in 1985, have been remastered from the original tapes and – if you go for the vinyl edition – with the original embossed covers, posters and inserts all included. Welcome to Hell, At War With Satan and Posessed have all been reproduced on splattered vinyl, with At War With Satan also boasting a six-page roll fold booklet and leather effect cover, and Black Metal is on swirl vinyl.

Also included is a double album entitled Sons Of Satan, featuring a whole host of unreleased demos from the vaults, some of which have remained merely myth amongst fans for decades. Amongst these legendary tracks are some of the earliest known Venom performances from all the way back in 1979, recorded live with original vocalist, Clive "Jesus Christ" Archer.

If that's not enough, there is also a 12-inch book on the history of Venom, featuring new interviews with all three original members by our very own Dom Lawson, who has very kindly given us an exclusive peak at his copy – Check it out below!

Whether a metal connoisseur or brand new to the world of heavy music, this really is the ultimate package. In Nomina Satanas is out May 31 via BMG and available to preorder now.