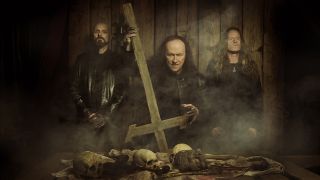 Venom have announced their return with a brand new single and details of their upcoming studio album Storm The Gates.

The extreme metal pioneers will launch the follow-up to 2015’s From The Very Depths on December 14 via Spinefarm Records and have marked the announcement by unleashing a stream of their new single Bring Out Your Dead.

Venom leader Cronos says: “We always say that a song has to find itself, has to develop. We’ve had nearly three years with these compositions, speeding some up, slowing some down, changing the lyrics, adding breaks, moving verses – that's how songs grow, and that’s how you end up writing a better album.

“That's why I don't believe in releasing a record every year – you can’t possibly have let those songs develop to their full potential.

“These albums are going to be around a lot longer than I am, so they need to be able to stand up for themselves. With an album every year, I think you end up with two or three good songs and then a load of shit – and I certainly don’t want to release that sort of album!”

Find the stream of Bring Out Your Dead below, along with the Storm The Gates cover art, tracklist and pre-order details.

Venom: Storm The Gates
Venom are back with Storm The Gates – their first record since 2015's From The Very Depths. It features the blistering lead single Bring Out Your Dead.View Deal