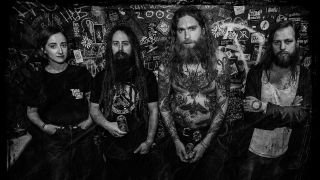 Formed by some of the surliest men and women known to Croydon Police Force, Grave Lines could be considered a doom/sludge band if they didn’t have the kind of narrative and dynamic chops that can make restlessness, dread and soul-chafing disdain for the plight of your species feel like aspirational qualities.

With a collective pedigree hammered on bands such as Throne, Sea Bastard, Dead Existence, Casual Nun, Landskap, War Wolf, Dysteria and The Death Letter, and fresh (for want of a better word) off a tour with Black Moth, Grave Line’s forthcoming album, Fed Into The Nihilist Engine, is due to be hacked up by NHS Records on May 4. A nine-track journey takes the scenic route through the most sulphur-stained basement of the human psyche, it’s an album that merges the elemental, detuned current of Neurosis, with gothic folk undertones, giving rise to the visceral poetry of tracks like the 11-and-half-minute epic that is The Nihilist Engine.

If you’re not poised over the ‘deploy NOPE meme’ button by this point, then wring some small amount of ultimately bitter cheers from the news that we have an exclusive stream of the video for said track, directed by Noomi Spook and offering a gristly vision that takes place amidst dank industrial caverns and a steel press.

We shall say no more, but the band themselves say of the song, “it stands as a symbol of humankind’s relationship with negativity. Inexorably pulled towards a voice that urges us to reject. A poison that breeds within our contempt for the world. The Nihilist Engine is a monument to the all consuming nature of self loathing.”

Put that in your pipes, block them and give in to the bleak brilliance of The Nihilist Engine below!