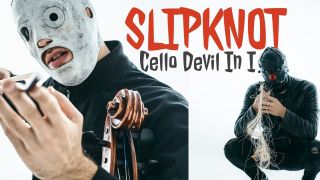 We've witnessed Slipknot covered in many various and often ridiculous forms thanks to YouTube. From Slipknot's Duality covered by different animals to one teenage girl's obliterating drum cover of Unsainted.

Our icy metal hearts were thawed when the band's 2014 single The Devil In I was covered by a tiny child, and while this latest YouTube gem might not be quite so heartwarming, it's bloody impressive.

YouTuber Sugar Cello (real name Fernando Nina) has not only covered The Devil In I, but reinvented it entirely.

The professional cellist and long time Slipknot fan says "I wanted to do a remake of Slipknot for a long time."

"I find their rhythmical grooves, the sound fusion and the theatrical aspect of their presentation intriguing and the music has an enormous potential to expand in sounds. It is rich. So I finally found the time to put my ideas together and do it."

One of the challenges Fernando says he encountered during the process of re-imagining The Grey Chapter anthem was bringing an orchestral feel to the material. Well, we think he did a pretty great job!

Watch the video below: