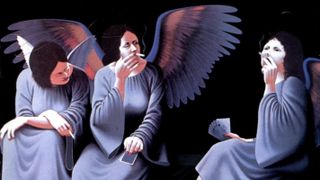 Let’s face it, Black Sabbath have a very poor track record when it comes to album artwork. In fact, throughout their history, the legendary godfathers of metal have been dogged with some of the poorest designs of all time. Sabbath seemed to regard album sleeves as nothing more than somewhere to put the record. However, there has been an exception to this, namely 1980’s classic Heaven And Hell.

At this juncture, the band were at a crossroads in their career. The introduction of the late Ronnie James Dio on vocals gave them a richer, more lush sound, but they had to convince a sceptical public than Sabbath could prosper again. For Dio, everything about the album was vital – especially the cover.

“We knew the artwork had to make an impact,” he said. “What we liked about the Lynn Curlee illustration was that it showed three angels seemingly relaxed by doing what normal people might do – smoking and playing a friendly game of cards. They were just taking a break from the job.”

Much has been made over the years of the fact that there were only three figures – did this suggest there was already trouble in Sabbath and that one of them was on his way out?

“You know, it’s kinda like everyone looking at the cover of Abbey Road by The Beatles, and believing Paul McCartney was dead for certain reasons,” Dio said at the time. “There’s too much being read into what is a straightforward painting. The three characters aren’t meant to be members of the band at all.”

Interestingly, four years later Van Halen used a similar approach for their 1984 album, except that they only had one angel, and it was rather a childlike figure.

“I’m surte that they got their inspiration from what we did on Heaven And Hell,” Dio said at the end of the 80s. “But whereas our angels were rather natural, and certainly not threatening, I found the 1984 cover a little too perverse.”

Black Sabbath do appear on the cover, although only on the back, in an illustration by Harry Carmean, a veteran American artist who used inspiration of the Old Masters to depict Dio, Tony Iommi, Geezer Butler and Bill Ward in an iconic fashion.

“I liked what he did, because we look slightly heroic,” said the frontman. “An album is about more than just the music. Heaven And Hell, as a package, is perfect. A lot of this is down to the sleeve as well as the music we made.”