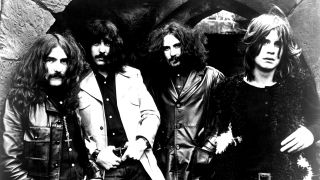 In the beginning God created the heaven and the earth. And the earth was without form, and void; and darkness was upon the face of the deep. And the Spirit of God moved upon the face of the waters. And God said, Let there be light: and there was light. And God saw that the light was good; and separated the light from the darkness. And in the darkness, God created Black Sabbath. And then God looked on in awe as Tony Iommi employed the Devil’s Interval and invented Heavy Metal and the earth embraced the darkness. And God said ‘Fuck this, I’m off, you’re on your own now lads.’

This is not a true story, obviously: there is no God. But Black Sabbath did indeed formulate heavy metal, and they did so with such authority and volume and power and artistry that the creation story effectively ended right there. For, more than four decades on from the release of the quartet’s truly seminal debut album, it’s a truism that no other band has come close to matching their legacy.

One of the most thrilling aspects of the music we all hold close to our blackened hearts is the fact that metal is constantly evolving, forever in a state of flux. For better or worse, metal would be an entirely different genre in 2015 if one were to remove the influence of, let’s say, Judas Priest, Metallica, Slayer, Pantera, Napalm Death, Death, At The Gates, Korn, Kyuss, Mayhem or Botch – to credit just some of the innovators who’ve re-defined our world. Metal has never calcified, never stopped moving forward. But Sabbath is the source, the core, the motherlode. And the music that Ozzy, Tony, Geezer and Bill conceived – most spectacularly on, though not limited to, the first six Black Sabbath albums will never be topped in terms of influence or importance. Indeed, if a cruel and omnipotent master of the universe were to delete every single metal album released post-Sabotage, there would still be enough magic in those first 49 Sabbath songs to enshrine and protect heavy metal’s status as a global religion. Admittedly, we’d then miss out on the majestic Heaven And Hell, to some ears Sabbath’s single finest hour, but no-one ever said that life under the thumb of a cold, omnipotent master of the universe would be fair, did they?

The starting point when one considers Sabbath’s legacy and impact, of course, will always be those riffs – Iron Man, Paranoid, Sweet Leaf, Supernaut, Symptom Of The Universe, Hole In The Sky – the fundamental corner stores of metal, and reason enough to canonise Birmingham’s finest. But there’s so much more to Sabbath than that. Geezer’s chilling, cautionary lyrics. The sheer desolation in Ozzy’s keening vocals. The incomparable swing in Bill Ward’s playing. The orchestration, the dynamics, the Grand Guignol drama. The apocalyptic, oppressive, crushing weight of the whole endeavour. So overwhelming were Sabbath at their peak that this writer, on the cusp of adolescence, actually felt nauseous upon hearing the band for the first time, via the We Sold Our Soul For Rock ‘n’ Roll compilation, and was too fearful to revisit the album for a good six months.

In fairness, such feelings were not exclusive. Speaking of hearing the same album for the first time at the age of 13, Machine Head’s Robb Flynn noted “I had never heard anything so terrifying and dark and evil”. And in his speech inducting Sabbath into the Rock And Roll Hall Of Fame in 2006 Metallica’s James Hetfield too spoke of encountering the band for the first time, of his nine year old self discovering “a powerful, loud, heavy sound that moved his soul.”

“Those monstrous riffs lived inside him and spoke the feelings he could never put into words,” Hetfield continued, “sending chills of inspiration through him, from those gloomy lyrics and outlaw chords and all. They helped crack the shell he was stuck in.”

In those few emotional, carefully chosen sentences, Metallica’s frontman articulated much of the appeal of heavy metal as a transformative force, and in Sabbath’s doomy hymns, metal can be heard in its purest distillation. Truthfully, only one band could lay claim to exerting an equal influence over the form, and that’s fellow Brits Iron Maiden, a group who owe almost nothing to their Brummie forebears in terms of sound and aesthetics. But while Maiden’s legendary status in undeniable, and their catalogue, when taken across the span of both band’s careers, can stand toe-to-toe with Sabbath’s own, it’s the Birmingham quartet’s name which is utterly synonymous with metal, simply because they wrote the unabridged heavy metal bible before Steve Harris had even willed his own band into existence.

It’s easy to take the old gods for granted. Because Sabbath have been around since the dawn of time – an exaggeration, but only by a few years – it would be entirely understandable if younger metal fans, with heroes and anthems of their own, were to look at the elegantly crumpled Osbourne, Iommi and Butler today and dismiss these aging men in black as irrelevant to their own lives, as relics of another time. Equally, one might pick apart the likes of Technical Ecstasy or Born Again or Forbidden or even 13, to argue that Sabbath’s legacy is over-rated, and there are undoubtedly truths in the harshest criticisms which might be levelled here. But the simple fact remains, that if you truly belong in this world – and presumably if you’re reading this, you do – it doesn’t actually matter if you identify yourself as a Sabbath fan, because Sabbath’s industrial revolution belched forth the very air that you breathe, whether you’re aware of the fact or not. No Sabbath, no life.

Metal fans love a good argument. Right now, someone out there is reading these words and muttering ‘Sabbath? Fuck off! Why not Agoraphobic Nosebleed/Shit Scum/Full Blown AIDS?’ Truly, life would be boring if we all held the same beliefs. But on this matter, we will brook no dissent. The game’s over, and Black Sabbath won.