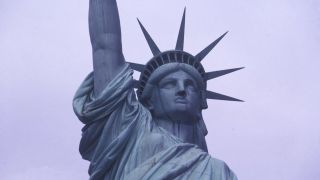 Overcrowded, overpriced, smelly, too hot in the summer, too cold in the winter, and yet New York is so good they named it twice. Love it or hate it, The Big Apple – hang on that’s three names – has been the inspiration for hundreds of songs, and as the birthplace of hip-hop and a spawning ground for punk rock has had a massive influence on music. Here we celebrate its impact with the top 10 tunes about NYC.

According to Fear frontman, Lee Ving, New York is also alright if you want to get pushed in front of a subway, mugged or murdered, or freeze to death. A former New York cab driver, Ving further observed that the city is a good place to get tuberculosis and find drunks in your doorway. Perhaps not surprisingly he now lives in Los Angeles.

This Ramones classic, later covered by Metallica, was said to have been an autobiographical tale about bassist Dee Dee hustling sex to pay for his heroin habit and being “the one they never pick”. Despite gentrification, the area is apparently still well known for prostitution. Sadly, Dee Dee died from a heroin overdose in 2002.

8) No Sleep Till Brooklyn – Beastie Boys

Released long before the Beastie Boys got all politically correct, No Sleep Til Brooklyn featured some amusingly unsavoury lyrics that were later altered in the most absurd fashion, “whore” becoming “mah-jong board” and “classy hoes” becoming “nobody knows”. Probably just as well since a children’s playground was renamed for vocalist/bassist Adam Yauch after his death in 2012.

7) Avenue A – The Dictators

New York legends The Dictators… Actually, that sentence doesn’t need finishing. Just look them up if you don’t know. In 2001 we find the band pondering the aforementioned gentrification of the city: “I knew Stiv in the day/That’s where the junkies used to play/Down on Avenue A.” Still playing shows, frontman Dick Manitoba also runs a punk bar in NYC called Manitoba’s.

Apparently Alice Cooper has revealed that the Hippo in the title of this song refers to the Hippopotamus Club in New York City, where the band used to hang out in the early 70s along with the likes of David Bowie and Mick Jagger. The song itself seems to be about a penis. We’re not sure whose though.

4) Five Blocks To The Subway – Biohazard

It would be remiss not to include Biohazard in our list, especially since former frontman Evan Seinfeld had the word ‘Brooklyn’ tattooed across his stomach. One of several songs about their home town, Five Blocks To The Subway finds them trying to get to work without getting mugged. And you think your commute sucks.

In 1973, the New York Dolls were making a similar journey on the subway, but, given their reputation, they were perhaps going in the opposite direction, towards the drug dealers and ne’er-do-wells. Given writer David Johansen’s rather vague lyrics, it’s difficult to tell exactly what’s going on here, but there’s a good chance that other passengers moved away.

London punks the UK Subs are not the first to fall foul of New York’s finest. Indeed, The Strokes wrote a similarly scathing tune entitled New York City Cops. Here we find Charlie Harper and pals being warned, “keep your mouth shut or we’ll break your nose”, after what appears to be a minor traffic violation. Welcome to New York. Have a nice day.

A self-explanatory tale of travelling to the intersection of Lexington Ave and 125th Street to buy $26 worth of heroin from a dealer who, as you might expect, is not entirely punctual. The intersection is now home to a McDonald’s restaurant.