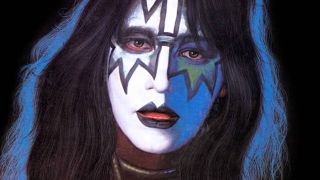 New York Groove is Ace Frehley’s very own personal anthem. The track is as synonymous with the ex-Kiss man as his silver superhero suit and smokin’ six-string.

Frehley was born and raised in the Bronx, so the Big Apple is his kinda town. And New York Groove is his kinda song – even though he didn’t actually write it. Nevertheless, when Ace barks the line ‘It’s gonna be ecstasy… this place was meant for me’ above that foot-stomping rhythm, you can sense the native pride shivering down his Spaceman spine.

“A lot of people think I wrote New York Groove. It’s not a myth that I’ve perpetuated, but that’s the way it is. I wish I would’ve wrote the song, though. I would’ve made a lot more cash out of it, ha-ha-hargh!” Frehley chuckles in his inimitable style.

In fact New York Groove was written by Russ Ballard and recorded originally by Hello, the glitter-popstrels who enjoyed a brief burst of fame in the mid-70s. Three years before Frehley included New York Groove on his self-titled 1978 solo album, Hello’s version was a hit all over Europe. It got to No.9 in the UK and No.7 in Germany.

Ballard takes up the story: “In 1975 I’d just finished producing Roger Daltrey’s solo album, Ride A Rock Horse. I got it cut in London but Roger said to me: ‘People say Bob Ludwig’s cuts are louder at Sterling Sound in New York. Do you fancy flying out and doing a cut there?’”

Ballard, the former guitarist with Argent, hadn’t been to New York for a while. “While I was sitting on the plane I got out a pen and paper and started thinking of the phrase ‘back in the New York groove’. That’d be a good title for a song, I reckoned; the whole idea of someone going back to New York and singing about the experience.”

Returning to the UK, Ballard met up with Hello’s manager, Dave Blaylock, who asked him: “Have you got any more songs my band might be interested in?”

Ballard had written Hello’s debut single, You Move Me. Hello had also demo’d another Ballard song, Can’t Let You Go, which had become a Top 40 hit for Barry Ryan.

“I wanted to do a Bo Diddley beat because I thought that sort of sound hadn’t been heard for a long time,” Ballard reveals. “So I got some maracas and a harmonica, and

I started off with this ‘cha-ch-ch-cha-chcha-cha’ rhythm. I got the members of Hello to stand on some trestle tables with their platform boots on and they all stomped along. I had the chorus – ‘I’m back, back in the New York groove’ – and I wrote the rest of the words in the studio.”

Frehley claims never to have heard the Hello track. “Or maybe I have and I just can’t remember,” he tells Classic Rock. “Can you send me an MP3 of it?”

The Ace Of Space decided to record New York Groove “because we realised we needed a more commercial song for inclusion on my solo record, so we tracked it while we were doing the overdubs in Manhattan.”

The majority of Frehley’s album was recorded in Sharon, Connecticut, “at somebody’s house. A mansion that was originally part of the Colgate estate – the toothpaste people. Is toothpaste big in England? Is Colgate an English chap or an American chap? Ha-ha-hargh! It kills me,” Frehley laughs.

“Up in Connecticut we cut all the basic tracks,” he continues. “It was just me and [drummer] Anton Fig. [Producer] Eddie Kramer brought along the Electric Lady remote truck. I had an old Les Paul, an old Fender and a Harvard amplifier with a 12-inch speaker. We put the guitars in one room and set up the drums in the hallway.

There were two staircases going up, to the left and to the right. We put the drums right in the middle. We mic’d above and got all natural reverb. That’s how we did most of the tracks.” New York Groove, however, was laid down in Plaza Sound Studios above Radio City Music Hall on 51st Street.

“It was kinda cool because the Rockettes – the dancers who perform at Radio City – used to sun themselves on the roof. The studio was right there off the stairway. These beautiful, semi-naked girls were constantly walking into the studio and checking out what was going on. So that was quite a nice recording environment.”

All four Kiss solo albums – from Frehley, Gene Simmons, Paul Stanley and Peter Criss – were released simultaneously on September 18, 1978. Frehley’s was the only one to generate a hit single, with New York Groove reaching No.13 in the US in early 1979 during a 21-week run in the chart.

“It didn’t feel like I was getting one over on the other guys in Kiss,” Frehley shrugs, “it’s just something that happened. I was lucky that it came out as good as it did. I never really listened to the other three solo records, although I did put Gene’s on once. When I heard his version of When You Wish Upon A Star I had to pull it off the turntable, ha-ha-hargh!”

Ballard says New York Groove is one of the most successful songs he’s written. “I guess it surprised me because it’s so incredibly simple. They say a good song will always sell. And there’s a lot of truth in that. I’ve got a few others that keep going round and round, which is wonderful. Songs like Since You’ve Been Gone, God Gave Rock’N’Roll

To You [recorded originally by Argent and covered by Kiss], and another one by America called You Can Do Magic which was absolutely monster in the US. Then there’s New York Groove, which still gets played at major sporting events in the city – like at Giants Stadium. It’s incredible.”

During our interview with Frehley we mention that we’ll be talking to Ballard as well as him. “Give him my best,” Frehley requests. “What’s he doing these days?” We don’t know exactly, we respond. Maybe he’s living off the royalties from New York Groove. “Ha-ha-hargh!” cackles Ace. “Ha-ha-hargh!”