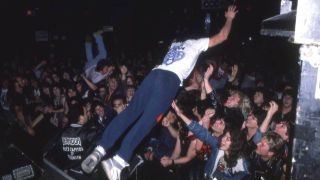 It was not like it is now, that’s the important thing to remember. Upon his election in 1994, newly minted mayor Rudy Giuliani promised – some would say threatened – to “clean up” New York City. And that’s exactly what he did. Over the course of the ensuing decade, Giuliani and his deep-pocketed benefactors scrubbed the streets clean, washing away any vestige of the grit, grime and lawlessness the city had become notorious for. Times Square is safe as milk now, a Disney-fied tourist Utopia built on the backs of all the artists, musicians, writers, poets, dead-end dreamers, pill-poppers, sex workers, hustlers, midnight movers, low-rent gangbangers and manic street preachers that were sacrificed so that moon-eyed gawkers can stroll around the big city munching on hot pretzels without fear of getting mugged, hassled or propositioned. But the music and the art and the memories of old New York remain. And they are intense.

“My roommate back then was a guy named Brian Moran. He was a performance artist guy who would do this thing where he’d be standing there naked, and then he’d pour cow’s blood all over himself,” explains Unsane guitarist Chris Spencer, speaking of the band’s early days in the late 1980s. “So I knew the places to buy the blood, they were close to my apartment. We were extreme gorehounds in Unsane. We would set up these circumstances, for album covers or whatever, and just do what we want, using real blood. So it wasn’t any fake shit. We called it ‘Going on a Blood Run’. We were like street vandals with cow’s blood instead of spray paint. A lot of these places you had to hit and run, because if the cops catch you throwing blood around, you’re fucked.”

Unsane were one of the many seminal heavy bands that dominated New York’s music scene from the late 80s until the mid-90s, when the great whitewashing began. Chris’s gang created punishing noise-rock, real howls-from-the- gutter shit that echoed the paranoia and angst of living in an overcrowded, underfunded city ruled by street crime. But they weren’t alone. NYC was a hotbed of ‘urban metal’, from the psychedelic industrial voodoo of White Zombie to the riot-starting combat rock of Missing Foundation, from the slow-deep-hard rivers of angst created by oozing neo-goth bands Life Of Agony and Type O Negative to the military-precision, concrete-cracking thump of Helmet and Prong, an early groove-metal band with a percussive, aggressive thrust that paved the way for nu metal a few years later. “We were definitely a Lower East Side band,” says Tommy Victor, Prong’s storied frontman. “We weren’t a bunch of kids in the suburbs playing in garages. We were part of that whole art scene, the same scene as street artists like Keith Haring and [Jean-Michel] Basquiat. It was like a lifestyle living down there in the East Village. It was a completely different world back then. I don’t know if any places like that even exist any more. A lot of people were willing to live Spartan lifestyles in shitty conditions in this fantasy art world.”

Much of what eventually became the metal scene in New York sprang from the fertile wave of hardcore that flourished at clubs like CBGBs, ABC No Rio and L’Amour, where bands like Agnostic Front, Cro-Mags, Sheer Terror, Warzone and Murphy’s Law often played. Some gigs were all-ages, some not, but all were manic, rabid, often wildly violent free-for-alls. “L’Amour in Brooklyn was the centre of the universe for all of us,” says Type O Negative guitarist and co-founder Kenny Hickey. “All the metal, hardcore and punk bands came through there. Everyone from Metallica, to Poison, to Motörhead.”

Tommy Victor was a soundman at CBGBs during Prong’s formation, and had a birds-eye view of the scene as it happened. “When I was working at CBGBs, the hardcore scene was in its heyday,” he says. “I saw and worked on a lot of great hardcore and metal shows. Dark Angel blew me away when they came through, and so did hardcore local bands like Leeway and Crumbsuckers. It was very raw and vital.”

While Unsane did not have ties to hardcore, like almost everyone else, they still spent a few wasted nights in the bowels of CBs. “Everybody in that whole scene, I’d say hung out either at CBGBs, ABC No Rio or The Pyramid,” he says. “The Pyramid was a pretty standard one. There was also a place called King Tut’s Wah Wah Hut; it had this little tiny back room and friends like Richard [Kern] would show his movies there or Brian would do his blood acts. Unsane played one of our first shows there. It was tiny. It held, like, 45 people.”

It seems impossible now, given their subsequent successes, that bands as influential as Unsane or Life Of Agony would play in rooms so small, but again, it was a different city entirely back then, one not constrained by money, genre or bias. “This was all before the existence of digital technology and cell phones,” explains Victor. “We didn’t have much communication with the outside world. The outside world to us was, like, Bayonne New Jersey, or [Brooklyn neighbourhood] Bensonhurst. Even bands from DC or Boston seemed alien to us. The only communication between scenes we had was the fanzines. That’s how Prong got a lot of recognition. Really, the whole scene survived through tape-trading demos and fanzines.”

Life Of Agony’s Mina Caputo, who came out as transgender in 2011 and transitioned from the male-identified Keith, remembers the band’s club days as a celebration of society’s outsiders revelling in their otherness. “All kinds of misfits attended our shows,” she says. “Outcasts, rebels, skinheads, metalheads, punks, mostly folks that felt or feel alienated from society’s mundane tight grip on life. Also, lawyers, pole dancers, cops, trainers, you name it. The spectrum was wide.”

“Some bands were concerned with their careers, certainly,” says Chris. “Unsane didn’t care about money, we just wanted to play. We got paid shit for a very long time, just because we enjoyed playing. When you have a small geographic area and a limited group of people, with everybody doing shit, and there’s access to clubs, you can do, creatively, basically anything you want to. All just through your friends, because we had friends that booked clubs and stuff like that. It was a great scene. I don’t know if there was anything else like it.”

Ultimately, NY’s seminal racket-makers found themselves signed to labels, some minor, some major, and the road beckoned. “Unsane just got heavily into touring,” Chris explains. Over four years we played no less than 300 shows. We really got out there. So I’d be back in New York for four or five days and then I’d be leaving for somewhere else. I really lost track of the scene. And that happens to a lot of bands.”

“After we got signed, we became a national act almost immediately,” says Victor. “We ran off. Things happened a lot faster back then. Ironically, even though we have all this technology and social media now, everything has been slowed down. But back then, suddenly we’re on tour with Soundgarden, and we just never went back. We were too busy all the time.” It wasn’t quite as fast for Type O Negative, but eventually even stubborn homebody Peter Steele climbed on the tour bus. “Peter had no intentions of ever leaving New York or his parks department job,” remembers Kenny. “It took nearly three years and two records to talk him into going on tour seriously.”

By the time bands like Prong were able to take a breather, they found a much different city than the one they left. “It’s just a playground for millionaires now,” shrugs Victor, who’s lived in LA for the last decade. “It was cool back then, man. It was tough and violent, but it was cool. Nobody really identifies with that anymore. Nobody cares. The whole ‘hipster’ movement is sort of a pop version of what was going on back then.”

And that was essentially the death of New York’s innovative metal scene. The bands that forged it in the fires of turmoil and street violence toured the country while politicians and real estate developers ate the city up, neighbourhood by neighbourhood, squeezing out all the weirdos, low-lives and edge-pushing artists. But despite the adverse circumstances that left many New York rockers fleeing for the west coast, many of the bands and players that made that scene so seminal are still in operation. Tommy went on to play with Ministry and Danzig, and Prong have just released a new album, the return-to-form X – No Absolutes. Chris has a new band, the crush-killing UXO, with Today Is The Day frontman Steve Austin. They just released a self-titled debut album, and Unsane will be touring later this year. Type O Negative broke up after the death of frontman Peter Steele in 2010, but Kenny rebounded with the doom metal band Seventh Void, who are recording a new album this spring. Life Of Agony have a new album, A Place Where There’s No More Pain, and Mina Caputo has also released a new solo album, Love Hard. Many of the clubs that hosted these bands are long gone except for hardcore clubhouse ABC No Rio which still, amazingly enough, hosts hardcore punk matinees every Saturday. The St Vitus Bar in Brooklyn has taken up the mantle laid down by L’Amour and frequently books metal bands, including revived 80s thrashers like Whiplash and Anvil Bitch. New York City has been overrun by the rich and powerful but somehow, some way, the beat goes on.

Unsane – Unsane (1991)
With one of the most infamous album covers of all time – a photo of a man decapitated by a train – the young “extreme gorehounds” in Unsane spat out one of the most brutal, punishing debuts ever. It’s a gut-punch of searing noise-rock.

Helmet – Meantime (1992)
Post-hardcore, post-noise rock, post-everything, really, Helmet’s signature staccato riffs and nods to jazz and groove-metal cemented them as one of the most eccentric and influential metal bands of the era.

Type O Negative – Bloody Kisses (1993)
Led by the strapping dark lord Peter Steele, Type O rose from the ashes of chest-thumping thrashers Carnivore and went on to create some of the most emotionally tortured goth-metal of the decade. Bloody Kisses is their magnum opus.

Life Of Agony – River Runs Red (1993)
Like their Brooklyn buds Type O, LOA languished in abject misery, but on their hard-charging debut they tempered their free-flowing bummer jams with enough crossover thrash and belching sludge to remind you that they were from one of the most dangerous cities in America.