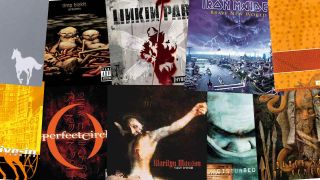 Deftones released their game-changing third album White Pony 20 years ago, and to mark the anniversary we spoke to frontman Chino Moreno and drummer Abe Cunningham about the making of the album for the cover of this month’s Metal Hammer.

The entire issue is a celebration of all the great music that came out in the year 2000, from Linkin Park’s Hybrid Theory and Marilyn Manson’s Holy Wood to such underground classics as Nile’s death metal landmark Black Seeds Of Vengeance.

The first proper album Maynard James Keenan sang on outside Tool was an alt.metal masterpiece. Its lush songs were mostly written by understated genius Billy Howerdel, former guitar tech for Tool and Nine Inch Nails, his shimmering tones underpinned by the genius drumming of Josh Freese, as Maynard’s vocals crept, soared or raged over the top.

Some of the record was emotionally heavy; Judith touched on his mother’s unwavering belief in God, despite the hypocrisy of her church community and a stroke that left her paralysed on the right side of her body. Other songs tapped into a murky stream of eroticism, such as pulse-racing opener The Hollow and the rhythmic, unashamed Thinking Of You, clearly about having a cheeky wank.

Despite Maynard’s issues with Christianity’s god, the album’s dreamy, reverb-drenched melodies, careful intonation and primal percussion gave it an undeniable spiritual quality, making for a spinetingling listen even today.

At The Drive-In – Relationship Of Command

By the dawn of the millennium nu-metal had become crass and bloated, and Ross Robinson was viewed as guilty by association. To escape the monster he’d helped create, the producer began to seek out other avenues and styles to explore. Texan post-hardcore band At The Drive-In had already released two albums before they hooked up with Robinson, but Relationship Of Command took things to another level.

Sprawling, incendiary and instantly influential, it introduced ATDI to a whole new audience and showed there was much more to the producer than downtuned guitars. The band’s trajectory to stardom was assured until underlying tensions exacerbated by success boiled over and they split less than a year after the album’s release. It’s the sort of thing Robinson would have been proud of.

One of modern music’s most challenging and definitive statements. White Pony turned Deftones from one of the best bands in a rapidly oversaturated scene into a genre all of their own. New member Frank Delgado brought a whole new set of subtle sonic touches to the band, Chino Moreno captivates throughout with a haunting, beguiling vocal performance and drummer Abe Cunningham keeps an irresistible rhythmic tattoo rolling from the first second till the last and even guitarist Stephen Carpenter, the one member openly unsure of the bands attempt to break free from the shackles of metal, manages to crowbar in enough jaw dropping riffs into the album. The closest thing metal has ever had to an album such as Radiohead’s Ok Computer, and the most compelling reason for why Deftones exist in a bubble all of their own making.

Oo-wa-hahaha! Whether through rock club DJ, music TV or stupid meme, most metal fans have got Disturbed Down With The Sickness. It was the ultimate 2000s nu metal anthem, boasting  a giant hook, a massive um, disturbing breakdown and a whole lot of swearing. Then there were its similarly catchy cousins, singles Stupify and Voices, both reflecting the kind of Hot Topic angst that saturated the scene. Simple as they seemed on the surface, these songs hooked in a generation of fans who were new to heavy music, and excited to identify with a subculture that spoke to them. And let’s not forget the impact of David Draiman – that double chin piercing was cool at the time, and his voice was just as distinctive. Their Tears For Fears cover (Shout 2000) was an unexpected addition, ultimately paving the way for their epic reworking of The Sound Of Silence.

The debut album from Boston post-metallers Isis expanded on the epic sound of their EPs. Rising and falling, swelling and receding, ebbing and flowing, their largely instrumental landscape was both emotional and cerebral, building on foundations laid down by the likes of Neurosis, as well as their fertile local hardcore scene (frontman Aaron Turner released many of these bands, as well as this record, on his own label Hydra Head). With such dynamic passion and sludgy intensity, they took the genre to a dazzling new level that many would imitate both at home and across the pond.

Its namesake is a jizzy arsehole but it sold over a million copies in its first week… so, yeah. Limp Bizkit’s third album is possibly the most obnoxious rock record ever; the hits keep coming and there’s not a lull until the 13th track, and that’s just because Hold On’s subdued, Scott Weiland-led tones aren’t riposted by a man bouncing around in baggy trousers shouting ‘FUCK! YEAH! ASS!’ This album is ridiculous. Hot Dog into My Generation into Full Nelson, My Way, Rollin’ (Air Raid Vehicle), Livin’ It Up… imagine having the cheek to think that’s acceptable behaviour. Experimentation was traded for songs basically everyone ended up knowing, whether they wanted to or not; so many people pretended to hate Bizkit at this point, stowing away copies of Chocolate Starfish… and doing the Rollin’ dance in private.

On October 24, 2000, a little-known band from California called Linkin Parkreleased their debut full-length, Hybrid Theory. And while the unsuspecting sextet didn’t realise it at the time, that album would go on to become not only the biggest-selling record in the world the following year, but also, more importantly, a generation-defining modern rock classic.

Its fusion of razor-edged metal riffing, slick electronic beats, twisting raps, eye-gouging screams and effortless pop sensibility saw it catapult the six nobodies from nowheresville to rock superstardom in a fashion that will probably never be equalled. An absolute dreadnought of a record, to call Hybrid Theory a phenomenon would be to almost undersell it.

With Bruce Dickinson and Adrian Smith joyously reinstated in the Iron Maiden ranks, Brave New World was always destined to be a stormer, and so it proved: The Wicker Man was their finest single since the ‘80s, Ghost Of The Navigator was a thrilling reinvention of the classic Maiden sound, Blood Brothers was a ballad with incisive emotional clout… and so on. Only the slightly cack-handed Out Of The Silent Planet let the side down, but no one noticed because they were too busy bellowing along to Dream Of Mirrors… “I only dreeeeam in blaaaack and whiiiiiite…!”

Marilyn Manson as the crucified Christ: that’s the cover and that’s what he was. A scapegoat to some and a martyr to others, but every household in the land knew his name following the Columbine shootings of 1999. The horror was pinned on Manson and instead of just taking it, he respectfully cancelled his remaining shows, hid away and recorded his masterpiece: Holy Wood.

No stone is left unturned as guns, god and government are all taken down a peg or 15, the sardonic sonic rage of Antichrist Superstar brought back and infused with Manson’s sharpest set of lyrics. Fight Song and Disposable Teens are rock club classics but even they’re disgusting, spiteful attacks on America. The juddering Cruci-fiction In Space. The fucked-off, relentless groove and rage of Burning Flag. The full-on industrial of King Kill and the chilling, closing throes of Count To 6 & Die. It’s all there. It’s all perfect. Manson has yet to better Holy Wood and that’s fine – nobody’s really bettered it. The flow of the record, the delivery of its concept, the clarity with which it strikes its opponents. A gargantuan artistic feat that will go down in history as Manson’s defining statement.

Towards the turn of the millennium, death metal was in a fairly stagnant state until Nile arrived. Schooled in Egyptian mythology and the works of HP Lovecraft, the South Carolinians’ riffs were mind-bendingly technical and their second album – the follow-up to 1998’s Amongst the Catacombs of Nephren-Ka – breathed new life into the genre.

You can read the full stories of some of 2000’s greatest metal albums in the current issue of Metal Hammer – in shops now or available to order online.