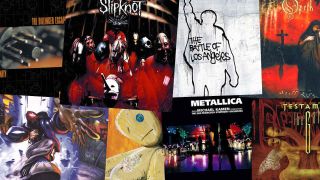 The 1990s was metal’s most exciting decade. And as those epic 10 years came to a close, there was still plenty of gas left in the tank. Here are 10 landmark albums from 1999

When Napalm Death released the album Scum in 1987 many of the music press declared that, in terms of extremity, music had reached its peak. And it was a widely held view until, on September 28th 1999, The Dillinger Escape Plan rewrote the rules once more with Calculating Infinity.

Mathcore was the sound of metal being twisted into startling new shapes, and few did it better than DEP on their debut album. Playing within the same scene that gave the world other such progressive, metallic hardcore luminaries as Converge, Botch and Poison The Well, the band increased the sonic extremities of the music even further, merging warp speed, jazz-tinged, scattershot riffs and broken electronic beats into a hardcore template.

Even today Calculating Infinity sounds truly thrilling and utterly unlike anything else, from the opening two and a half minute breakneck, visceral thrill of Sugar Coated Sour to the title track’s brooding, seething but restricted instrumental.

A transitional album, IX’s stormfronts of prog and death never stopped it being a work of imperious grandeur in its own right

Previous to this record, Sweden’s Emperor were the kind of band reserved for people who never got laid or men who had bald spots and hair halfway down their back.

Strange, then, that 20 years later IX Equilibrium is viewed by those in the know as being An Important Event. Which, distilled, means this: Without Emperor there would probably be no Opeth and dark metal would likely still be daft.

This album was the first marker that extreme was evolving.

Fred Durst was the brat-prince of nu metal, and this was his crowning glory.  Taking Three Dollar Bill, Y’all$’s abrasive racket and mollycoddling/expanding it (delete as appropriate to your bitterness), Bizkit transformed into a juggernaut.

The Durstisms came thick and fast, our red-capped hero saying “yeah!” and “bab-eh!” instead of rapping, enlisting Method Man to take care of that on N 2 Gether Now. The ‘Realised that I’m worth more than that’ in No Sex is essentially Stacy’s Mom by Fountains Of Wayne but 10 times better, Don’t Go Off Wandering’s got gorgeous strings courtesy of Borland’s brother Scott and the nasty, full-frontal riffing of I’m Broke is an unused gem from Three Dollar Bill, Y’all$.

The hits still rule – even a guy in a Darkthrone hoodie knows Break Stuff – and the Jonathan Davis/Scott Weiland guest spots on Nobody Like You have aged gloriously. This was the late 90s in 15 songs.

Metallica went where no metal band had gone before and teamed up with a symphony orchestra for their take on Last Night Of The Proms with anger issues. An inspired collaboration which leant even more ‘sturm und drang’ drama to their most epic and enthralling songs.

The Outlaw Torn, Sad But True and Bleeding Me sound phenomenal here, and new song No Leaf Clover is an absolute beast. Those privileged to see this recorded, or to witness the subsequent performances in Berlin, New York or Las Vegas, will ever forget it.

It's also a great album to prove the point that anyone who claims that Metallica have nothing worth listening to post-'Black' album is a fucking idiot. In fact, the band’s fearless risk-taking and sense of adventure post-1991 arguably makes their ‘second act’ all the more more interesting – albeit their quality control nose-dived significantly.

A sprawling double album that owed as much to Pink Floyd’s oblique soundscapes as techno-metal pummelling.

More nuanced, but no less harrowing than its predecessor, The Fragile can be viewed as a companion piece to The Downward Spiral, chronicling one man’s (ultimately doomed) quest to find a sense of place amid the chaos of modern life.

Its isolationist anthems are by turns stark and disquieting (The Great Below, La Mer) or pained and desperate (The Day The World Went Away, We’re In This Together), presenting a fractured but fascinating narrative arc. Nine Inch Nails’ first US No.1 album, it’s a challenging and indulgent collection, but an undeniable artistic triumph.

Trent: miles ahead of the pack… again.

After redefining what heavy music was during the first half of the 90’s, Korn had become genuine rock stars, with all the excess and trappings that go with it, after Follow The Leader’s incredible success.

It was a tough spot for a band that had gained notoriety through such savage music and such bleak catharsis to now be sharing spots on charts and magazine covers with Britney Spears and The Backstreet Boys.

Notoriously divisive and lukewarmly received by the their fanbase at the time, Issues still proved that Korn could still bring the downtuned, tormented, black-hearted hits among their rising celebrity.

Opeth's fourth album moved further away again from their death metal roots, and into a more progressive sound. It also showed evidence of Mikael Akerfeldt’s maturing skills as a composer and his band’s increasingly powerful identity.

It was the second time the band had gone for an overall concept, which they’d first done a year earlier with My Arms, Your Hearse. It was also the start of an ongoing relationship with Travis Smith, who has done the artwork for every subsequent Opeth album.

Suddenly, a prog-metal future opened up in front of them.

Rage Against The Machine - The Battle Of Los Angeles

RATM’s third studio album, The Battle Of Los Angeles, came out in 1999. That means it’s been over 20 years since we last heard new original material from the band. Yet here we are, still talking about them, two decades later.

What’s even more impressive is how fresh, vital and relevant their music still sounds, and The Battle Of Los Angeles was the moment the quartet perfected their art. The first three songs (Testify, Guerrilla Radio and Calm Like A Bomb) in particular are absolutely unstoppable, whilst the record as a whole serves as a lasting reminder of the groundbreaking music RATM created.

The agit-metallers’ third album was their confrontational peak. Over 20 years on, we need them back more than ever – which makes their recently announced reunion all the more welcome.

In 1999, nine men from Iowa gatecrashed the nu metal party with their ferocious, self-titled album.

In retrospect, Slipknot’s 1999 self- titled album was a major change in metal. Until then, bands were still caught up in the fallout from grunge, and while the lightweight pop-metal of bands such as Korn, Limp Bizkit and others were keeping hard rock alive and on permanent rotation on MTV, there was nothing outside of the underground to challenge the old guard of Slayer, Metallica and Megadeth, nothing with any real substance.

By the time Slipknot was finished, everyone else seemed a bit silly by comparison.

So the ‘90s was a thrash wasteland, was it? Two years before Slayer came back all guns blazing with God Hates Us All, Testament refined their death/thrash fusion.

Featuring death metal luminaries Steve DiGiorgio and James Murphy on bass and lead guitar, and none other than Dave Lombardo behind the kit, The Gathering was a precision strike to the senses.

Testament’s eighth album forced those who wrote them off as a thrash metal relic to eat their words.