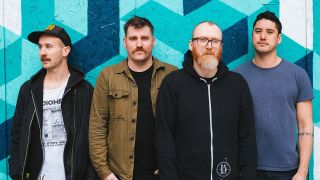 Belfast’s proponents of post-metal And So I Watch You From Afar have been reinventing metal instrumentals for over a decade and recently released their fifth album The Endless Shimmering. Standing alongside the likes of Amenra and Solstafir, 2017 has been a good year for all things ‘post’. But what are the greatest post-metal albums? The ones that really stand the test of time and still shatter our emotions into a million pieces.

Neurosis – Through Silver In Blood

“I was drawn to Neurosis when I read that they started as a hardcore band back in the day and evolved their sound and craft by incorporating samples, keys, punishing riffs, a sometime dual-vocal assault, but always with a sense of melody. This album really expanded my mind as to how heavy music could make you feel.”

“Russian Circles dextrously compose some of the best dark/light moments ever committed to record. Their ability to move between the heaviest of riffs and bewitching melody is matched only by how competently the music is played. I picked Enter as this was my introduction to the band and definitely influenced my style in the early days of ASIWYFA.”

“Introduced to me by a mate in 2003, I instantly fell for this album and snapped up all their EPs and albums since. NightEndDay’s main riff strides along like some sort of behemoth – albeit one that will hug you instead of crush you to death – that’s equal measures murky and affable, seemingly without turning off the distortion. Highly recommended.”

“I was a bit late to the Isis party but have since revisited their earlier recordings. For me, this gave the ‘scene’ a swift kick up the arse. Aaron Turner seems to have a knack of turning everything he touches to gold. What they did with Oceanic was re-inject some new life into the scene. The beginning and the end starts pretty much like you’d expect, but when Turner’s vocals kick in he somehow manages to make his throaty lyrics sound beautiful. Maritime is a beautiful example of how Isis can constantly move the goal posts of ‘post rock.’ At nearly 11 minutes long, Weight is beast of a tune. Maria Christopher’s hauntingly beautiful voice makes this essential listening if you are into the genre.”

“First played to me by a friend in the late ‘90s, I became good friends with one of their guitar players and main songwriter, Ian Booth. Fra Daivalo starts with a sample of a telephone ringing before ripping your face off with one of my favourite riffs of all time. Bassist Philip Donnelly’s parts on all SUG recordings were superb and the vocal talent of Booth and Paul McClure was like nothing I’d heard before. So bleak in parts but also beautiful. It still saddens me that they’re not a band anymore. Unfortunately, SUG disbanded in 2010.”

“A very brave debut double album from these young guys. The idea was that Disc 1 was the heavy side and Disc 2 was ambient tracks, and they should be played at the same time. Even without Disc 2 it sounds amazing.”

“I’d known of Cult Of Luna for a while, but Salvation was the first album that really grabbed my attention. The video for Leave Me Here received plenty of airtime and the album itself I thought was a turning point for the band. Upon listening, it feels like every single ounce of their being has been poured into this record and they’re not just going through the motions. And it worked – it launched them up to the next level. Heavy, tight, melodic and from beginning to end is still a triumph of an album.”

Battle Of Mice – A Day Of Nights

“Thought of as a kind of a ‘supergroup’ mainly due to Julie Christmas and Josh Graham. Christmas’ vocals range from timid schoolgirl to banshee wailing, and for me Sleep And Dream is a perfect of example of everything that made them great.”

“Whilst not to everybody’s taste, they certainly tick all the ‘post-metal’ boxes, but have definitely managed to not just sound like their influences. Utilising haunting vocals and keyboards, sledgehammer guitar and drums, it’s a great debut LP from this London-based band.”

“Often overlooked, and again like some of the bands on this list they’re not strictly ‘post-metal’ per se, this album is an unreal mix of all that is ‘post-everything.’ These guys are unbelievable live and should not be missed at any cost. If you have never listened to this band and you like heavy guitars, beautifully subtle moments, interspersed with blistering drum patterns and throaty vocals, give these guys a spin.”

And So I Watch You From Afar’s new album The Endless Shimmeringis out now via Sargent House.

And So I Watch You From Afar - Endless Shimmering album review

Post-metal isn't the hipster genre you think it is