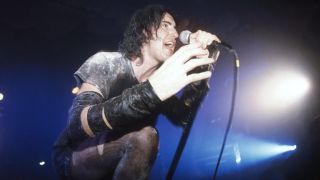 “New NIN coming in 2016. Other stuff, too.” That message was tweeted on December 18, 2015 by Trent Reznor, the blackened heart of Nine Inch Nails. While it’s nothing like the wait for the next Tool record, Reznor’s self-imposed time-limit has us checking the internet’s dirtiest corners on a daily basis – we’re greedy and need more NIN, and a soundtrack for the forthcoming Patriots Day just isn’t enough. As we fidget in our seats and chew our fingernails, fingers and hands into bloody stumps, here’s the industrial mastermind’s legion of LPs, ranked in descending order of greatness.

No NIN record is bad, but Ghosts I-IV slithers into last place due to its uncompromising nature; you really have to be in a specific frame of mind to appreciate this improvisational, mostly instrumental two-hour slog. Produced by Reznor alongside usual suspects Atticus Ross and Alan Moulder (and originally intended as a five-track EP, lest we forget), this collection of pitch-black ambience has more in common with Tangerine Dream and Brian Eno than it does Ministry or Killing Joke. The Dresden Dolls’ Brian Viglione was drafted to drum on 19 Ghosts III and 22 Ghosts III (all the songs are titled as such, we’re not just being lazy) and told by Reznor: “Build a drum kit.” In response, Viglione used a baking tray. Aside from its free release under a Creative Commons licence and the obvious link to Reznor and Ross’ future collaborations on film soundtracks, Ghosts I-IV is proof that you can go it alone, peaking at No.14 in the Billboard 200 charts with no backing from a label whatsoever.

Yet another collaboration with Ross and Moulder brought forth The Slip, available for free, guiltless download under a Creative Commons licence once more. Which was nice. Recorded and released in the space of just three weeks, NIN’s seventh LP is yet another cathartic scissor-kick to the music industry’s grinding gears, instantaneous in both its creative process and content. Front-loaded with tracks reminiscent of With Teeth’s rock club anthems (1,000,000) and Pretty Hate Machine’s new wave leanings (Discipline), the recordsoon descends into territory trodden through Ghosts I-IV and the murkier corners of The Fragile. While not a classic comparable to NIN’s early material, The Slip still rocks when it wants while offering a buffet of introspection and sexy beats.

Released just four years after NIN’s Wave Goodbye tour, Hesitation Marks saw a return to major labels in the form of Columbia Records and, more importantly, a return to the stage. Trent missed us all, obviously. NIN’s eighth full-length builds on the ambient catchiness The Slip had a go at, most successfully through Came Back Haunted; sleazier avenues are slid down with All Time Low and the superbly slinky In Two, frantic EBM is channelled through Running while the, er, interesting effort that is Everything provides sweet vocal harmonies amid the usual crashing, clanging etc that you’d expect from NIN. Overall, Hesitation Marks is a valiant comeback record and one that leaves us salivating over the thought of fresh material.

The closest NIN have ever come to releasing a straight-up ‘rock record’, With Teeth takes the Broken EP’s chunky, layered walls of industrial metal and sands them down. The Hand That Feeds is a club-ready classic and You Know What You Are? still bites when required; the title track’s glitchy trappings break up the record’s relative simplicity while the piano and noise-driven influences seep through towards the record’s climax, Right Where It Belongs tying everything up in the most eerie of fashions. Nirvana/Foo Fighters god Dave Grohl pummels the skins for half the record’s tracks, which explains that feeling of your spine actually snapping when you put With Teeth on. Although it’s NIN’s most ‘straightforward’ LP since Pretty Hate Machine, With Teeth is still an absolute winner and, following Reznor’s post-The Fragile inactivity and depression, we should be grateful we got anything at all, let alone something of this superb standard.

A paranoid, post-apocalyptic conspiracy theory of an album, Year Zero was largely composed on Reznor’s tour bus, resulting in its shift from With Teeth’s full-band sound to the more electronica-based NIN we’ve been familiar with for the past decade or so. Vessel is a dirty, dismal display of effects and The Great Destroyer gets its wob on in such a way it makes you think: “Why didn’t Korn just hire Trent instead of Skrillex?” On the other hand, Capital G and Survivalism both possess choruses that deserve their own dunce hats. A record that trounces With Teeth in terms of scope and the actual quality of songs, Year Zero’s on-the-go inception gave Reznor free rein with the remaining budget, pissing Interscope Records’ money away on the most ludicrously brilliant album tie-in ever. There was a Year Zero alternate reality game, fliers were handed out and USB sticks containing songs, web addresses and the like were scattered across venues worldwide; aside from Creeper’s recent promotional ghost-hunt, no band’s even come close since.

The synth-pop one that’s not really synth-pop. Sure, the arse-shaking perversion of Sin and Sanctified’s naughtiness are reminiscent of Depeche Mode and the darker, more twisted edge of the genre. But Head Like A Hole? That’s heavy fucking metal, that chorus is. The bouncy, twitching electronics, hulking beats and mostly scant guitars are obvious nods to industrial pioneers Skinny Puppy, with Down In It being, by Reznor’s own admission, “a total rip-off of Dig It by Skinny Puppy.” Yeah, Pretty Hate Machine’s tinny production and bygone influences have obviously dated, but the songs themselves are still as affecting and a charming vision of Reznor before he made seven albums’ worth of bleak, horrifying noise. Kinda I Want To is still a dynamic reminder that old video game music was awesome and Ringfinger’s refrain remains, to this day, terrifying. Even with the awful turntable effect at the end.

Not one for the easily-pleased, The Fragile ran with NIN’s burgeoning success and did everything it possibly could to try and ruin it. This double-disc beast is the most widespread representation of NIN you’ll ever get in one piece of work; Starfuckers, Inc. carries on that brief dalliance with full-on metal we got with the Broken EP, No, You Don’t is almost a Pretty Hate Machine reprise and We’re In This Together is a full-blown anthem of solidarity. Elsewhere, Reznor toys with sing-song, childish melodies on The Day The World Went Away and shits all over Radiohead’s latter-day output with the piano-led La Mer while The Big Come Down starts like Front Line Assembly covering Mr. Bungle. Arguably stretching Reznor’s art to the furthest it’s ever been, The Fragile deserves to be viewed with the same reverence as Swans but, well, with more actual songs.

It was always gonna be The Downward Spiral, right? You knew that before you even opened the page. While The Fragile remains Reznor’s greatest statement in a sense of scope, The Downward Spiral is NIN’s definitive moment. Recorded in the Tate House (where the Manson family infamously murdered Sharon Tate) while Reznor was depressed, anxious and suffering from crippling addiction, the band’s second LPremains one of the grimmest depictions of the human condition ever. Loops of live drums and anaemic, wiry guitars take the Broken sound and starve it of any hope, love or nutrients. March Of The Pigs’ quiet/loud dynamic delivers the most beautiful of beatings, Closer will remain a strip-club anthem until the Earth dies and the harrowing tones of A Warm Place and thetitle trackare, much like The Fragile’s bulk, something you could associate with post rock bands just as much as you could Big Man With A Gun with Ministry. Yes, Hurt is still incredible, but this album is infinitely more powerful than just one song. The Downward Spiral is a bleak, barren view through Reznor’s eyes circa 1994 – look if you dare.