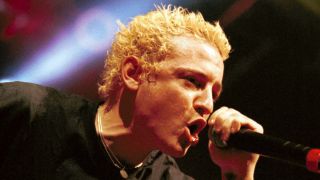 Oh, Hybrid Theory. You brilliant, shameless, obnoxious little beast. Just as it looked like nu metal was threatening to retreat back into metal’s peripheries in a haze of chains, lip piercings and misplaced angst, along you came to put it right back at the very forefront of heavy music, outraging countless diehard metalheads in a manner not seen again until three Japanese teens were decked in pigtails and plonked in front of a death metal band.

Where Korn and Deftones had undermined metal’s traditional themes and imagery and moulded its sound into curious new shapes, this was something that would break the scene forever: a line in the sand between those who ‘got it’ and those who abhorred it that countless bands would cross in its wake. The floodgates were opened for millions of new, unfamiliar faces to lay claim to being metal fans, while many who had championed heavy music over the years refused to accept its inclusion into the genre’s storied ranks.

It was, in layman’s terms, a genuine game-changer – and, as it turns 15 this week, its impact on our world is more keenly felt than ever.

For me, as a 13 year old goofball who had barely started to scratch the surface of metal’s amazing, unconquerable annuls, Hybrid Theory was the spark that ignited my passion for heavy. At that point in time, my interest in metal had extended to a Rage Against The Machine tape my uncle had given me (shout-out Uncle Gareth) and wondering who that kickass band doing The Undertaker’s new music was. I had dabbled with The Offspring, Nirvana and Green Day and was aware there was a big fuss in the rock media about some dude called Bruce coming back to a band who got name-checked in that Wheatus song (yeah yeah, Leave The Hall etc), but other than that, I was as green as Kermit’s tiny felt pecker. And then I saw the video for One Step Closer.

The colours. The clothes. The imagery. The flying monks! It was the coolest shit I’d ever seen, and while it rapidly got put in its place as I’d soon discover more subversive, retina-frazzling visuals from the likes of Manson and Slipknot, it was the first time in my young life that I felt like I was watching – no, was part of – the start of something special. And the music. Oh, man, the music. That first riff. The breakdown. The scattershot scratching from Joe Hahn. That line. It mashed everything I liked in music together and presented it in one, neatly-polished package. Needless to say, I went out and bought the album and was hopelessly hooked. Whereas many bands of that era peaked with a strong single and offered little else, Hybrid Theory was brimming with killer cuts. Papercut! Crawling! Points Of Authority! In The End! A Place For My Head!!!

Night after night I’d stay up late, headphones plugged into my stereo, wordlessly mouthing along to every single lyric, trying not to bang my head too hard lest it shook my bed and gave the game away to my mum (sorry mum). Every song was a slam dunk, every chorus arena-worthy. It was perfect, and beyond all else, it was just great music.

And it still is. While Linkin Park’s evolution away from anything remotely metal-based means many original fans have fallen out of love with them, Hybrid Theory remains flawless, and even if you ignore the fact that it sold 27 million copies to become the biggest selling debut of the decade (an astonishing feat whichever way you paint it), its influence runs rampant. Many have pointed out Bring Me The Horizon’s shameless channelling of LP on this year’s That’s The Spirit, but Oli Sykes waxed lyrical about Hybrid Theory’s influence on the band back in June 2013, telling Hammer, “Hybrid Theory still sounds amazing to me. I’m not at all ashamed to say the vocal style on Sempiternal is influenced by Chester Bennington.” Crossfaith frontman Ken Koie too stressed the album’s importance to us in January last year, stating that it “was nothing like [he’d] ever heard before” and that the band’s DJ, Teru, “is always talking about them and was keen to get into a band as a DJ after he saw them”. From Of Mice & Men to Beartooth via Issues, there are countless bands making waves in 2015 that wouldn’t be here without Hybrid Theory. You might not like all those artists, but they’re opening doors for a lot of young fans now in the same way Linkin Park were back in 2000.

And, if there was any more evidence needed as to just how important an album Hybrid Theory is, you only need look as far as last year’s Download. I’ve been lucky enough, whether through work in recent years or as a punter before that, to have been to a lot of festivals over the years, and I can honestly say, hand on heart, that I have never, ever witnessed a 40 minutes like the opening half of Linkin Park’s set on that Saturday night. It was always going to be special to see them play the that album in full, but to see 90,000 people singing, screaming and air-punching along to every single lyric of every single song felt like vindication for a generation of metal fans (and yes, we really are metal fans) who came through the door that album kicked down.

Plenty of metalheads – indeed, almost certainly the majority that truly identify themselves as ‘metalheads’ – will have little to say of Hybrid Theory. For them, it represents the moment that metal ‘went wrong’, that it created a space for vacuous, happy-to-be-here cookie cutter bands to paint themselves in tattoos, sing about nothing and call themselves metal. Can I dispute that notion? Not really; it’s hard to argue that it provided the spark that still causes countless big and, in many cases, genuinely heavy bands to be cynically spurred by metal fans to this day. Does that mean it’s a bad album? Don’t be silly. If you’re looking for depth, meaning and subversiveness in your music, it’s out there waiting for you. If, however, an album’s musical merit is what its legacy should live and die on, then Hybrid Theory is as good as it gets.