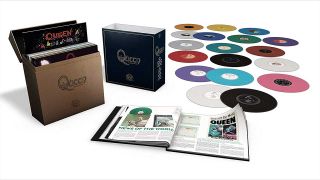 What's better than vinyl? Boxes stuffed full with coloured vinyl, that's what. With that in mind, we've scoured the internets to bring you the best selection of multi-coloured wax. Whether you're after a slab of B.B. King on blue, goth-tinged hues from the heart of Gothenburg, or rainbow-spanning Queen platters, we've got you covered.

We'll be updating this list monthly, so be sure to check back. Otherwise, head straight to the sites to browse their vinyl sections in the meantime.

The sheer ostentatiousness of this entire luxury-priced combo is what makes it so essential. That and the fact it includes Keep Yourself Alive, Brighton Rock, BoRap, Tie Your Mother Down, Hammer To Fall et al, all pressed in different colours, plus a big old book, 320kbps download codes and loads of surplus cardboard to sicken and crush your less affluent friends. Bottom line: it’s a truly magnificent chunk of kit, but nowhere near as dazzling, breathtaking and desirable as the timeless genius that’s pressed into its glorious grooves.

U.K. SUBS re-release their first four studio albums on deluxe edition 180gram coloured vinyl. Another Kind Of Blues has – you guessed it – been turned blue, while Brand New Age pops up in brown, Crash Course is in red and Diminished Responsibility comes in white. All four LPs are individually housed in their original sealed and custom stickered gatefold picture sleeves.

This noble box set contains the transparent vinyl versions of ten Hammerfall albums plus the Gates Of Dalhalla quadruple-LP, including a 54-page book. Limited to 400 copies worldwide.

In Flames - Sounds From The Heart Of Gothenburg vinyl box set

If you want goth, you've got it. In Flames break the rules, reinvent themselves with every album and are considered to be one of Gothenburg's brightest metal forces – the result of which is showcased in this Sounds From The Heart Of Gothenburg box set. The explosive live performance was recorded in November 2014, in front of a sold-out venue of 10,000 fans, right inside the Scandinavium – in the heart of their hometown Gothenburg, Sweden.

This deluxe version includes the 10 original tracks from White Noise, as well as two new studio tracks: You And I and Empty. The bonus DVD contains nine exclusive music videos released since the initial release of White Noise in late 2014.

This three-LP compilation documents B.B.King's breakthrough years, when, initially signed to the Bihari Brothers RPM label, he unleashed a torrent of superb recordings that would establish him as the world's most famous blues singer-guitarist. He made scores of remarkable recordings during his career – but the ones on this compilation represent that marvellous moment in time when Riley King and Lucille combined to make their indelible mark on the history of the blues.

The Currents Collectors Edition box set includes the album on limited edition red marbled vinyl with alternate artwork, a 12” featuring two remixes, and a 7” and flexidisc with three b-sides.
Plus a poster and a zine of images and scribbles offering a candid glimpse into the making of Currents.

A Live One, Phish's inaugural live album, is available here for the first time on vinyl, in this limited edition 4-LP set. After five studio albums, A Live One captured and conveyed the magic of the band's improvisational live shows, and every song on the record (except Montana) has remained a staple of Phish shows ever since. A Live One was released by Elektra on June 27, 1995 on CD and cassette. It was the first Phish album to be certified gold, and remains Phish's best selling album. Each LP is pressed onto 180g vinyl and includes a free MP3 download of the album transferred from vinyl.

This is the second Saxon LP box released by Demon Records - eight live albums in a numbered box (4 2-LPs in a gatefold cover), designed by famous artist Paul Gregory (who is known for designing Saxon cover artworks and illustrations of J.R.R. Tolkien's works). All LPs were pressed on gold-coloured 180 gram vinyl.

The Acacia Strain's seventh album has become a deathcore classic since its release in 2014, and is now available as a double coloured vinyl box set, with the CD thrown in for free for good measure.

Tenth studio album from the American heavy metal band, and their first in eight years. The album, which includes the singles Hardwired, Moth Into Flame and Atlas, Rise!, entered the UK Albums Chart at #2. This deluxe edition includes an additional third disc which features live tracks recorded at Rasputin Music in Berkeley in April 2016.

For the first time ever on vinyl, Futurismo present an unmissable collection of studio demos and unreleased rare tracks that span DEVO’s entire recording career, from their original basement days to their famed Freedom Of Choice era, right the way through to unused demos from their last studio album, included as part of the six bonus tracks taken from the archives that have never been released, or even heard before.

Live From Beyond Hell / Above Heaven vinyl box set

This three-LP red vinyl box set captures a series of performances from 2010 and 2011. It includes a download code.

The music from the HBO series Game Of Thrones sixth season is composed by Ramin Djawadi, the composer best known for his Grammy-nominated score for Iron Man and movies such as Pacific Rim. This three-LP deluxe limited edition features coloured and etched 180 Gram audiophile vinyl. It's from the out of print first pressing of 2,000 worldwide, and comes individually numbered.

All prices correct at time of publishing.