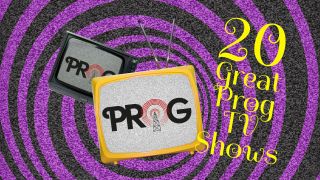 Before the mid 60s, TV in the UK was dreadful – monochrome, Muffin The Mule, the potter’s wheel, 10pm shutdown, ITV game shows, cheap programmes with limited ambition and strangulated posh voices. Things started to improve, thanks in part to classy US imports and their British imitators. The raft of excellent American sitcoms and dramas that started to show up on UK screens between 1962 and 1967 was the televisual first wave of rock’n’roll: The Twilight Zone, Bewitched, The Addams Family and Star Trek. By comparison, UK TV looked dowdy and out of touch. Before long, programme-makers on both sides of the Atlantic were looking to push the boundaries within the confines of the format.

It was the same sort of creative drive that, in a few months, saw no-frills R&B groups mutate into ambitious, pretentious – in a good way – prog combos. Like prog rock, prog TV looked beyond its limitations,  and started to bring in material and ideas from art, theatre, film and philosophy. When Lew Grade, the great TV magnate and enabler of this new wave of creative TV, commissioned actor and producer Patrick McGoohan to make a sequel to his successful Cold War spy drama Danger Man (aka Secret Agent Man), he gave British TV a drop of something hallucinogenic that changed it forever. The Prisoner was to TV what Sgt Pepper is to albums. It was a marvellous demonstration of the possibilities of popular drama. As for comedy, Monty Python’s Flying Circus blew apart the doors conceptually and culturally – and made its mark on Jethro Tull, said Ian Anderson in Prog 15: “Python challenged the perceptions of what people were doing. It was prog humour, surreal expression. We [musicians] liked that… and found new boundaries.”

There is no single paradigm for prog TV: PTV ranges from psychedelic children’s shows such as The Banana Splits, to frustrating Gordian-knot mysteries Twin Peaks and Lost, where the viewer is never entirely sure what is going on. And, as with prog rock, it isn’t for everyone.

Originally piloted on BBC Three, this is enjoying a DVD revival. Set on an island of 719 people and 1,000 tesselators (TV posts that also watch you), This Is Jinsy is a Kafka-esque absurdist show in the Python tradition with a cast list from Harry Hill to Catherine Tate to KT Tunstall. Impossible to describe to anyone who hasn’t seen it.

A series about global events, temporal shifts, corporate conspiracies and exotic physics, FlashForward sought to exploit the public’s taste for confusion and complexity in the wake of Lost. It required you to grasp heavy concepts about predestination, time, paradox and cosmology. Cruelly axed after one series, the final episode raised more questions than it answered.

Originally an update of The X Files, Fringe has evolved into headfuck TV involving shape-shifting agents from parallel universes who bleed mercury, a mad scientist who blew his mind on acid in the 60s and an evil corporation housed in a building that looks like it was done by Escher. Fringe subverts expectations: just when you think you know what’s going on, everything gets turned upside down again.

More great WTF? TV in the tradition of The Prisoner. Survivors of a plane crash on
a Pacific island do their best to stay alive. Or are they really dead and in the afterlife, or another planet, or a parallel universe, or a virtual reality simulation, or a reality TV show? The final episode left most questions unresolved and the debate continues;
Lost was TV’s Tales From Topographic Oceans.

The gritty reboot of the lame 70s Star Wars knock-off was a tour de force of intelligent writing, believable characters and philosophical debate about man, God and machine. Its basic premise is a space opera about humans in spaceships battling intelligent robots. But it is about so much more. Like The Sopranos and The Wire, BSG didn’t treat viewers as simpletons and thrives on DVD.

David Lynch’s supernatural film noir soap opera changed expectations of what could be done on the small screen. Twin Peaks was a murder mystery, a small town drama, an insight into human evil and a celebration of coffee and pie, rolled into one. Whether you loathed it or scoured every episode for meaning, it was proof that viewers were hungry for less bland, formulaic fare.

Starred David McCallum and Joanna Lumley as inter-dimensional agents sent to investigate temporal anomalies. Nothing was spelled out, so the viewer was often left to guess what had taken place in the episode. They hunted and destroyed ghosts which were caused by disruptions in time. Said to have been a huge influence on The X-Files.

Patrick Duffy – Bobby Ewing in Dallas – played a survivor from Atlantis who could breathe underwater. He is recruited by a secret government agency and tackles a predictable array of aliens, megalomaniacs, giant jellyfish and lost undersea races. The first US TV show to be seen in the People’s Republic of China.

A spin-off from the film of the same name, Logan’s Run was set in a post-apocalyptic America where people survived in a domed city and volunteered for death at 30. Those who resisted – the runners – were hunted down. Logan, his girlfriend Jessica and a robot called REM are pursued through a ruined America.

Paganism, mind control and astrophysics were combined in this disturbing kids’ drama set in Avebury, Wiltshire. A sinister priest-scientist taps the power of
a black hole through rituals, all to Sidney Sager’s eerie choral soundtrack. The Wicker Man meets Invasion Of The Bodysnatchers by way of 2001.

Set in Birmingham’s underworld, this was one of the first UK series to acknowledge growing urban racial diversity. It used techniques such as jump cuts, interspersing the action with footage from kung fu and Bollywood films, even having the actors acknowledge that they are taking part in a drama and walking off the studio set. The excellent theme and soundtrack were performed by Colosseum’s Dave Greenslade.

A six-part children’s show produced by HTV, Sky was an enigmatic alien. Our Earth starts to turn on him, as a body rejects an infection, so tree roots and plants move to attack him. With the help of two children, Sky has to find the Juganect, a weak point between dimensions. Naturally this turns out to be Stonehenge. An intelligent slice of mystical science fiction.

Another ITV teatime kids’ show, The Tomorrow People were teenage mutants with telepathic, psychokinetic and teleportation powers. It dealt with alternate universes, Nazi occult aliens and mind control. And, most terrifying of all, Keith Chegwin as a rock star. The opening titles were far more mind-blowing than the show itself.

TV kids’ drama about a stage magician called Tarot and his associates. It blended supernatural menace and science fiction with crime-fighting. The protagonists looked like they’d be off to smoke dope at a Quintessence gig after foiling the world domination plot of aliens using a village fête for cover.

There’s always been an absurd kink to British comedy, but Python transformed the genre. The surreal skits and Terry Gilliam’s animated inserts made it unlike anything that had gone before. The Pythons signed to Charisma and became labelmates of Genesis, appropriately.

Another quixotic children’s fantasy, starring ex-Artful Dodger and fledgling hellraiser Jack Wild, and predating Teletubbies by 30 years. The world of H.R. Pufnstuf – a man in a giant dragon suit with a Deep South accent – is a collision between Salvador Dali and a Tex Avery cartoon, where kitchen implements are alive and can talk.

One of animator Hanna-Barbera’s forays into live action TV, The Banana Splits was a Warholian explosion of surrealist pop art. Men in giant animal suits – aka Fleegle, Bingo, Drooper and Snorky – cavorted in a playhouse, mimed to bubblegum pop, introduced cartoons and held dance-offs with rival gang The Sour Grapes. It appealed to eight-year-olds and stoners in equal measure.

This was the first WTF? TV series: a secret agent is kidnapped and placed in a prison-town called The Village where everyone is given a number. Patrick McGoohan as Number 6 spends each episode trying to escape or get one-up on his captors. Its final bewildering episodes never deigned to deliver a pat explanation. To this day people debate what it was all about.

Gerry Anderson started making puppet-based TV in the 50s. Fireball XL5 (1962) was the first UK series to be sold to the US, while Stingray (1964) was one of the earliest colour shows. Thunderbirds was his masterpiece – quality scripts, fantastic machinery and envelope-pushing special effects. And, in the midst of the Cold War, it carried a message about co-operation rather than conflict.

Made in East Germany in the late 50s and recut by the BBC, The Singing Ringing Tree was the earliest manifestation of surreal weirdness on children’s TV. Using cheap but imaginative sets and costumes, the show is an expressionist fairy tale, closer to Nosferatu than Walt Disney. When it was repeated in the 70s, the vivid colour added a new dimension of oddness.

This feature, written by the late Tommy Udo, originally appeared in issue 22 of Prog Magazine, December 2011.