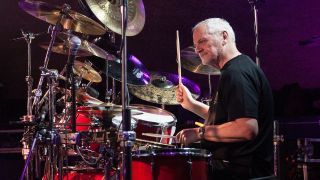 Though you can never fully encapsulate a person's life in a single word or phrase when it comes to summing up Jon Hiseman then ‘momentum’ comes awfully close to capturing the man. Even the simple act of listing his most significant collaborations it’s hard to keep up with the sheer velocity that propelled him from one venture to another across a professional career spanning over sixty years.

His first love was jazz and Hiseman’s drive quickly distinguished him on the UK scene. While still only semi-pro in the mid-Sixties he was a member of Group Sounds Five, rubbing shoulders with Jack Bruce, trumpeter Henry Lowther and future one-time Soft Machine guest, sax player Lyn Dobson, in addition to stints with the New Jazz Orchestra and visionary pianist, Mike Taylor. He recalled those hectic days in Ian Carr’s book, Music Outside. “I had to get up at 8.00 am and go to work all day. I’d get home at about 6.00 pm, have something to eat then practice… then go out to play…I’d be going to bed at 1.00am. Then the next day the whole process would repeat itself.”

Finally quitting his day job in Unilever’s marketing department in order to join Graham Bond’s group he eventually worked with John Mayall’s Bluesbreakers, recording the acclaimed Bare Wires in 1968 alongside Dick Heckstall-Smith and Tony Reeves. At the end of his time with Mayall, he knew he his days as a jazz player were up. He admitted to Ian Carr, “I couldn’t really face going back to playing in dreadful pubs to forty people and doing a day job.” Always a highly motivated individual, his solution was to form Colosseum, in his words “to do all the things that a rock group does, but to play music that was as complex as anything that anybody was playing. And I proved to my own satisfaction that it could be done.”

Colosseum harnessed elements of blues, rock, and jazz with such a fearless energy, they were rightly acclaimed as being at the cutting edge of the progressive music scene following the release of 1969’s Valentyne Suite. Though they broke up in 1971, Colosseum would be a musical safe harbour to which he returned in various incarnations across the years, including a more fusion-orientated Colosseum II featuring a young Gary Moore on guitar. A player of staggering virtuosity and versatility, his early 1970s radio sessions with Jack Bruce and John Surman are revelatory.

I talked to Jon in 2011 when I was asked to write liner notes for 1973’s self-titled Tempest debut, featuring Allan Holdsworth and 1974’s Living In Fear with the equally brilliant Ollie Halsall now on guitar. During our chat, Jon held forth on his chosen career. If you asked Jon what he thought about a particular topic he would tell you in clear, unambiguous and, occasionally, uncomfortably direct terms. That candour frequently extended to sometimes harsh and unforgiving judgments on his younger self. An ability to read a balance sheet as fluently as he felt where the beat should go in a piece gave him a practical and completely unsentimental approach to running a band.

Jon developed a good ear for record production. He told me that when it came to the mixing of Dick Heckstall-Smith’s criminally underrated 1972 solo release, A Story Ended, he took to producing like a duck to water. His production on the much-revered Ian Carr album, Belladonna, from the same year similarly benefits from the clarity and muscularity of the sound Jon brought to the studio. Paying attention to the likes of Tom Newman and Geof Emerick had paid off, he told me. More recently, one of the last productions he worked on was the forthcoming new Soft Machine album, Hidden Details, recorded in December last year at his Temple Music studio in Sutton.

In 2010 a biography of Jon, Playing The Band, was published. Coming in at nearly 500 pages it was a weighty tome. Given the myriad of musical connections accrued during a busy career, it needed to be. Looking over the finished work Hiseman told the book’s author Martyn Hanson, “I... got the bug when I was in my teens and just went for it - seldom looking left or right, never looking down and just ‘playing the band.’ Life seemed pretty simple to me, in that every decision was made with the sole purpose of getting the current project brought home to a successful conclusion... then moving on to the next idea which was already taking shape.”

It was the deaths of Larry Coryell, closely followed by that of Allan Holdsworth in 2017 that prompted Jon to reunite with his old Colosseum bandmates, Clem Clempson and Mark Clarke to form JCM. Their subsequent album, Heroes, released earlier this year, was a tribute to some of the players who had believed in him and given support to Hiseman along the way. There’s something profound and oddly poetic that Jon was suddenly taken ill in the middle of JCM’s tour and his subsequent diagnosis of cancer which took him away. Pugnacious, persistent and determined to overcome whatever obstacles came his way, Hiseman was one of the pioneering musicians of his generation.

Though Hiseman lived and breathed music the real love of his life was always his wife, sax player Barbara Thompson, whom he married in 1967 and with whom he collaborated in Paraphernalia, the United Rock And Jazz Ensemble and numerous other settings. Following her diagnosis with Parkinson’s disease in the late ‘90s it was thought she’d never work live again but her appearances in the reformed Colosseum in 2004 and their farewell concert 2015 was a source of great pride and unstinting admiration from Jon. It’s no accident that his favourite track, Foyers Of Fun, from Tempest’s first album was written with Barbara in mind; “There's no place I've not left in great haste/For the journey back home.”