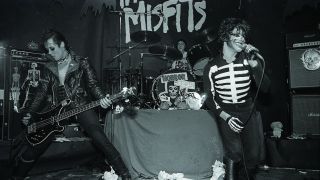 CHAPTER ONE: ON A DARK, DARK NIGHT…

In October 1982, just a couple of weeks before Halloween, the Misfits had played a show in New Orleans and decided to explore the local graveyard. Clad in their horror-punk stage outfits and thick make-up, with a bunch of fans in tow, they were supposedly looking for the resting place of Voodoo priestess Marie Laveau, when the police turned up and arrested them on charges of grave-robbing.

“It’s best to leave the dead where they lay!” laughs bassist Jerry Only, recalling the incident today. “New Orleans is full of ghosts and stories of the undead. We were the perfect candidates for the police to track down in the cemetery. I was wearing a leather trench coat and shades, and as I was walking out, the police called over to me and said, “You better get in the lineup, Drac!”

More than music, the Misfits represented an alternative culture and lifestyle, which would permeate our world and the mainstream in the years to come. Despite parting ways with vocalist Glenn Danzig just a year later, in a split so bitter you could slice it, stick it in your drink and call it a lemon, their songs would be covered by the likes of Metallica, Guns N’ Roses, NOFX, Gallows, AFI, Hatebreed and My Chemical Romance, while their Fiend Skull logo has graced everything from shoes to bikinis. Thirty-three years later, the original lineup is being resurrected for two special live festival appearances in America.

“The Misfits isn’t just a band, it’s an ideal,” says Jerry today. “This band has two lives – I call this the afterlife.”

CHAPTER TWO: THE BIRTH OF A LEGEND

Formed in New Jersey in 1977, and taking their name from Marilyn Monroe’s final movie, the Misfits exploded onto the US punk scene like no other band before them and perhaps no other band since; a horror cartoon come to life. Fronted by Danzig, who’d later be nicknamed ‘Evil Elvis’, their songs were short, violent, and catchier than crabs, marrying the simplicity of the Ramones and The Stooges with the theatrics of The Damned and Alice Cooper.

“That is very accurate on the influences,” says Jerry, who worked in his father’s machine shop at the time. “We got together for the sake of creating original music, being sick of the big-haired glam scene. We wanted it to be balls-to-the-wall, out of the gutter and in your face. In the beginning, we didn’t have enough songs to play a full set, so we did everything twice and we would break everything. Then we would drag the rubble back to the machine shop and rebuild it – kind of like what they do with Iron Man today.”

Needless to say, that shortage of songs didn’t last long, and in 1978 the Misfits recorded their now-classic debut album, Static Age, a 14-track monster that included tracks such as Last Caress, Attitude and Teenagers From Mars. Unable to find a record label, however – Static Age would finally get released in 1997 – they set their sights on conquering the UK punk scene, crossing the pond in 1979 for an ill-fated tour with The Damned.

“I went there to present ourselves as a dominant force in the scene,” Jerry explains, “but the British punk scene was already corporatised. We were DIY; they were all on labels. That’s what we were there fighting against. We’d deal one-on-one with our peers, not with corporate people concerned with the bottom line, instead of the integrity and brilliance of the band and the music.”

CHAPTER THREE: DEATH ON THE ROAD

In typical Misfits fashion, the UK ‘tour’ became another folkloric tale of chaos, and, alas, the UK punks’ only chance to see the Danzig-fronted lineup. They played just two shows with The Damned before telling them to “fuck off!” and then, with no gigs to play and their return flights not scheduled for a couple of weeks, decided instead to do a little sightseeing. Jerry went to Canterbury to visit Sid Vicious’s mum, while Danzig got himself arrested and spent two nights in Brixton jail after an ‘incident’ that later inspired the song London Dungeon.

“Glenn had gone to see The Jam at the Rainbow [in Finsbury Park, north London] and a bunch of kids picked a fight with him,” recalls Jerry. “He threatened them with a piece of glass. The Old Bill locked him up for having a weapon. It was a crazy time, but we held our own and we’ve got a great song to prove it.”

Having yet to release an album by this point, and with just a handful of self-released singles to their name – all rarer than rocking horse shit – the Misfits were fast becoming a veritable hit machine, albeit not in commercial terms. Pretty much all of their early tunes, such as Attitude, We Are 138 and Teenagers From Mars, went on to be bona fide classics. In fact, they released just two full albums during the classic era of 1977-1983: Walk Among Us in 1982 and Earth A.D./Wolfs Blood in 1983 (two months after Danzig had left). But you only have to look at the number of bands who’ve covered those songs to know that they were pretty special. Hell, half of the bands they inspired weren’t even born by the time the Misfits split up, some of them, ironically, only getting to know the band through those covers.

“I always felt that we were on to something big,” agrees Jerry. “The impact was far ahead of its time. When Metallica and others like them looked at it, they saw the purity and the genius behind what it was. The songs are simple – anybody can pick up a guitar and learn one of our songs without knowing how to play – but it’s the hooks that have captured the attention of the last three generations. It was fast, hard and real, and the bottom line was we didn’t give a fuck. We weren’t doing it to be rockstars. We were anti-rockstars, and we wanted to be scorned and hated. I think we’ve done a good job. Ha ha!”

CHAPTER FOUR: SKELETONS IN THE CLOSET

By 1983, the Misfits’ classic era was over. The members have since been tightlipped about why and how it ended, Jerry today shrugging off the question by saying it was because they’d come to a point where the world needed to catch up to their futuristic visions. “If we’d gone any further, everyone on this planet would probably be dead at this point,” he laughs. “I think now, people understand what we meant when we started. I still don’t think they understand where we were when we stopped.”

Danzig went on to form Samhain and then the eponymous band Danzig, while Jerry formed an unlikely Christian-themed metal band, Kryst The Conqueror, with Misfits guitarist Doyle Wolfgang Von Frankenstein. But, like any self-respecting horror film baddie, the Misfits legend refused to die, if anything growing stronger in their absence. Their ‘Crimson Ghost’ logo adorned thousands of jackets, becoming iconic and as instantly recognisable as Iron Maiden’s Eddie or Motörhead’s Snaggletooth, and even the ‘devilock’ haircut – slicked-back hair with that mutant rockabilly quiff, pulled down in a long strand at the front – took on a life of its own.

“The devilock came about because of Elvis and Superman,” explains Jerry. “I don’t know anybody more influential than either one of them. I just took it to a darker, more ominous place. The devilock is Kryptonian, out of Memphis!”

In 1995, Jerry reformed the band with Doyle, recruiting Michale Graves on vocals. That lineup lasted five years before changing several times, with Jerry the only constant member. In a way, there are parallels with Black Sabbath: people focus on Ozzy, as they do Danzig, but Jerry kept the name of the band alive in the same way that Iommi did for Sabbath.

“I think Iommi saw what I saw,” says Jerry. “A shot at immortality. I had to sing in the band to keep it going. I think that’s what kept both our bands alive. I congratulate Tony on his relentless pursuit. He has slayed the dragon. We’re about to go in the dragon’s lair and kill them all. There might not ever be a band like the Misfits again, but in my opinion the band never broke up. The sun comes up every morning, and the Misfits come out every night. There are misfits in this world who have never heard of our band, but they think outside the box, and they do things that change the world.”

And so… here we are with the classic era lineup set to play again, back from the dead. So far, there are just two shows on the horizon – Chicago and Denver in September for Riot Fest. But maybe, just maybe, the UK will finally get to see the classic-era Misfits, too.

“When I sat across from Glenn,” says Jerry, “and realised we both felt the music and the timing was perfect, and that we were both at the top of our game, all the rest of the bullshit meant nothing. It really never did. We just wanted to believe in each other again, and at that moment, we did. If you don’t believe in each other, it’s never gonna happen. As far as England goes, when we get Wembley Stadium, you’ll see us. This isn’t a reunion – this is the second coming!”

The Original Misfits play Riot Fest Denver on September 4 and Chicago on September 18. Misfits’ EP, Friday The 13th, is out now

The story behind the Misfits’ iconic Fiend Skull logo

In true, horror punk fashion, the Misfits’ logo comes from the mask of the eponymous villain in a 1946 film serial called The Crimson Ghost. On an evil mission to steal a counter-atomic device called the Cyclotrode, which can short-circuit all electrical current in the world, he kills those who stands in his way.

The band first used the image on a poster for a show at Max’s Kansas City on March 28, 1979, and three months later it appeared on third single Horror Business. It became such a cult symbol that the likes of Cliff Burton and Henry Rollins had it inked on their bodies. In 1994, Jerry and Danzig signed a contract which gave them both the rights to use the band’s name, logo and artwork, and in 1995, the second incarnation of Misfits released the song Crimson Ghost, all about the exploits of the dastardly criminal.

The Fiend Skull has continued to live across the generations, though in 2014, Danzig brought a claim against Jerry, alleging that his merchandising activities had breached the terms of their agreement. It was later thrown out. With their rifts now healed and The Original Misfits set to return to the stage, you can undoubtedly expect a slew of new t-shirts and more featuring the 70-year-old spectre.