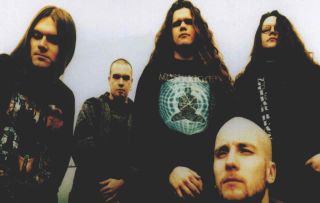 From the technical experimentation of the late 80’s and early 90’s that saw death metal bands begin to develop a penchant for atypical rhythms, hyperblasts and the odd slice of jazz fusion to the so-called djent movement of the 00s, tech metal is the very definition of order in chaos. Here are the 10 essential albums from across this extreme and expansive genre.

Widely regarded as a pivotal release in the development of both the tech death sub genre and extreme metal in general, Death’s Human marked a pronounced stylistic change for the Floridians. Gone were the gore-splattered lyrics and in their place stood more introspective subject matter, with a renewed focus on pushing death metal’s mutant complexity. The primal intensity of albums past clashed enticingly with virtuosic arrangements and jazzy interludes as frontman Chuck Schuldiner’s incomprehensible growls met prog’s intricate musical chops on songs like Secret Face.

From their initial rise to prominence within the extreme metal underground to becoming synonymous with establishing the djent subgenre, Meshuggah have inspired a slew of bands since debut album Contradictions Collapse. But it was their 1995 landmark Destroy Erase Improve that put the Swedes on the proverbial map. Staccato-like riffing, atmospheric interludes and frequent time signature shifts coupled with Jens Kidman’s ferocious barks came together in a symbiotic fusion of death metal, prog metal, industrial and hardcore to craft 10 near-perfect songs. Widely imitated but never duplicated, it’ll still give you goosebumps today.

It’s impossible to talk about tech metal without mentioning this second album from Montreal’s Cryptopsy. Sit back and revel in the twisted lyricism of vocalist Lord Worm - served via an unholy torrent of inhuman gutturals and demonic shrieks - whilst the hyper blasts of Crown Of Horns and Slit Your Guts’ disturbing tremolo picking offset by relentless breakdowns pound your cranium into ruthless submission. Brutal and beautifully chaotic, None So Vile remains the pinnacle in the band’s discography and is a must-have for any extreme metal fan’s collection.

London’s SikTh arguably created the blueprint for progressive tech metal with their multi-layered (and unfathomably eccentric) debut The Trees Are Dead & Dried Out Wait For Something Wild back in 2003. Three years later, the sextet cemented their position as genre pioneers with this follow-up. Chock-full of bm-imbued gutturals, unsettling cleans and haunting melodies alongside lyrical themes such as war mongering, human existence and failed relationships, DOADD managed to somehow stir the blackest of souls and still incite frenzied headbanging courtesy of the one-two punch of Bland Street Bloom.

Packed full of throat-shredding screams, exquisitely precise drumming and polyrhythmic chaos, Brighton’s Architects wore those tech-tinged influences on their sleeve on third album Hollow Crown. From Early Grave’s fiery blastbeats to the vitriol-soaked, angst-ridden aggression of Borrowed Time and Numbers Count For Nothing’s nod to mathcore past, the absolute sonic bludgeon that would befell the listener was impossible to ignore or resist. More than a decade on, it is still regarded by many as one of their most important records to date.

Animals As Leaders were initially conceived as a one-man project, with guitarist Tosin Abasi responsible for the composing the entirety of this self-titled debut. Unquestionably unique and unconventional in terms of its rhythms, Abasi mixed Meshuggah-influenced metallic compositions with jazz-fusion and Latin flourishes to produce a melting pot of tech-prog flavours; the wizard-like shredding on CAFO is as intricate as it is beautiful.

TesseracT’s fourth full-length album traversed chilling soundscapes, boasted huge choruses and moved seamlessly between polyrhythmic grooves and chaotic time signatures, with opener Luminary offering up arguably the sharpest hook and heaviest riff these Brits have penned since their 2011 debut One. Complex, cohesive and undeniably crushing, Sonder marked a heavier step forward in the quintet’s sonic evolution as they continued to fearlessly push those musical boundaries.

Proving that there was room in death metal for a bit of safe sax action, Pennsylvania’s Rivers Of Nihil pushed their ultra-ambient approach to tech-death to the sonic limit on this 2018 album, offering up 10 multifaceted soundscapes that are as punishing as they are progressive. From dissonant guitars and throat-punching vocals to the groove-laden melodies you’ll find nestled amongst the merciless aggression, Where Owls Know My Name was an eclectic and extravagant triumph that saw the band hit an an all-new apex with this third full-length.

Prog metal/djent pioneers Periphery have spent the better part of a decade influencing a whole host of rising and established acts, as well as guitarists with a penchant for technical wizardry – largely due to the mind-boggling fret-wrangling of band founder Misha Mansoor. From the 17 minute odyssey that is opener Reptile - packing everything from lush strings to some of the most punishing riffs the quintet have ever laid to tape – to the filth-laden stomp of Follow Your Ghost, Hail Stan is a near-flawless exhibition of musicianship.