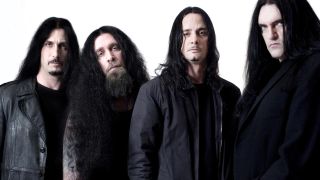 Goths and metalheads spent the 1980s eyeing each other suspiciously from a distance, very distinctive tribes and sounds with next to no overlap. But by the 1990s, these tribes had come together and sparked off a boom time for the gothic/metal crossover, many heavy bands foreswearing their gnarly roots to follow the Sisters Of Mercy's vision thing, creating a vibrant, sophisticated, enduring subgenre. Here are the most essential goth-metal albums of them all.

Not just the birthplace of avant garde metal, Swiss visionaries Celtic Frost’s third LP was steeped in gothic atmospheres wholly new to the genre. From the languid eroticism of Sorrows Of The Moon to the industrial dance of proto-dark wave oddity One In Their Pride, culminating in the ornate operatic death-doom of Rex Irae, its violins and female vocals directly inspiring the 90s goth metal revolution.

Specifically it’s the digipak edition of the Drab Four’s third album that zeroes in on the full gothic motherlode: filling up the inlay with stone angels, dropping the interludes and fun punk knockabouts and replacing them with the doomed majesty of Suspended In Dusk, and resequencing the LP so it’s thrillingly topped and tailed by towering goth anthems Christian Woman and Black No 1 (Little Miss Scare-All).

Paradise Lost’s second album, Gothic, blazed new trails for death and doom metal, but it was with this 1995’s breakthrough that they firmly planted their flag into the equidistant sweet spot between goth rock and heavy metal. Suffused in elegant gloom and dry-ice drama but brimming with heads-down energy and infectious tunes, Draconian Times looked a lot like the arrival of new royalty.

After their early occult black metal, Portugal’s Moonspell performed the most fully committed gothic transmogrification of any ex-extreme metal band with this spellbinding 1996 opus. When the infectious Opium kicks in - the brisk pace, moody keys, loud/quiet guitars and nocturnal croak setting the tone for Moonspell’s career - it’s like a goth butterfly emerging from a metal chrysalis.

Born in the heat of goth metal’s late 90s ascendancy, His Infernal Majesty went on to dominate the 00s scene. This debut is where the impact was made, Ville Valo bringing a new and already highly distinctive voice to the scene, while his open-hearted pop sensibility was neatly offset by the band’s heaviest metal guitarwork.

Another band steeped in gothic aesthetics from day one, but with this Clive Barker-indebted breakthrough Cradle Of Filth were refining their epic clattering fury into more accessible, stately arrangements, the gleaming jet-black production bringing to life sumptuous catchy ditties of morbid longing like Saffron’s Curse, Tearing The Veils Of Grace and Her Ghost In The Fog.

Gothic metal can get a bit over-cluttered with atmospheric bells and whistles, but in 2001 Lacuna Coil’s focus was on crafting beautiful, straighforward, emotionally charged songs, the duetting ‘beauty and the beast’ vocals of Christina Scabbia and Andrea Ferro lending the band’s crisp doom structures a flamboyant, impassioned USP.

It seems insufficient to call these Portland, Oregon youngsters’ thrilling debut LP ’gothic metal’. It’s not metal played in a gothic way: it is gothic rock, and it is heavy metal, two distinct forms precociously mastered, melded and deployed with both studious respect and passionate conviction, plus a crucial knack for an affecting chorus.