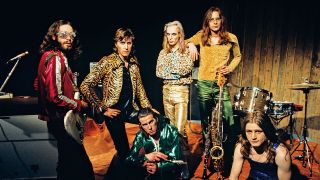 Bryan Ferry nervously brushes back the quiff of hair from his face. Behind him, he hears a preparatory swirl of notes from the sax, and the climactic build of a showbiz-style roll on the snare drum. The guitarist, now finished tuning up, gets everyone’s attention and, after the briefest of pauses, there’s a count-in and it begins.

As the controlled frenzy of the drums erupt and both sax and guitar become demonically entwined, Ferry inches nearer the mic, eyes closed, taking a breath just ahead of his cue. ‘Concrete cold face cased in steel. Stark sharp glass-eyed crack and peel’ he trills over heavy slab-like minor chords. ‘Bright light scream beam brake and squeal. Red white green white neon wheeeeeel.’ The stentorian vibrato in the vocal makes those around take notice. But as the number scrambles to a truncated crescendo, it’s clear that nobody – including Ferry – is especially pleased with the results.

The session is over. The guitarist thanks the singer for his time. His voice was fine but ultimately not right for King Crimson. However, before Ferry leaves Crimson’s basement rehearsal room, Robert Fripp gives him the telephone number of EG Management, suggesting if Ferry gets his own band together, he gives them a call.

Although he doesn’t know it yet, as Ferry steps out onto the Fulham Palace Road, this failed audition will turn out to be the biggest break of his entire career.

For most groups trying to make good the starry-eyed dream of getting signed to a label and eventually recording and releasing an album, you had to get your hands, and much else besides, dirty. Driving the length and breadth of the country’s B roads, humping bass bins into inaccessible venues, playing to indifferent audiences whose only glimmer of enthusiasm is the moment when you announce it’s your last number; all of this, and more, were part of the time-honoured system of paying your dues.

Signing to EG Management (who looked after T-Rex and ELP as well as Crimson), Roxy Music bypassed all that irksome stuff, sweeping onto the scene, apparently fully formed, in a haze of pop, pastiche, synthesisers, sequins and Brylcreem in 1972, with only half a dozen gigs under their belt, and a debut album that remains a remarkable tour-de-force.

One man who had no doubts whatsoever about Roxy’s future prospects was Phil Manzanera. “I just knew they were going to be absolutely huge when I first heard them. They were special people. They were all quite stylish and intelligent. I was only about 20 or so and here were these 25-year-olds who all looked so grown up. They’d been to university, they had bank accounts; two of them were teachers; they had a car; they’d got a bank loan to buy a PA! They were really cool people.”

Manzanera famously lost out the first time he auditioned for Roxy in the summer of 1971 to David O’ List, previously a member of The Nice. “If it had been any old Tom, Dick or Harry, I’d have been upset. I’d seen Davey with The Nice at the Royal Albert Hall so I thought fair enough. Because it was him I didn’t mind too much.” Yet when O’ List departed in February 1972 , Manzanera, by then notionally mixing sound for the group, picked up where he left off.

When Roxy Music was released in June 1972 on Island, TRecstasy saw vast portions of the nation’s teenage population swooning, and David Bowie was busy unleashing Ziggy Stardust And The Spiders From Mars. A cursory glance in the direction of Roxy might have suggested that they were simply hitching a ride on the coattails of glam rock. Yet both record and band pulled off a how’d-they-do-that conjuring, trick scooping up pop culture references from the past, present, and possible futures, into one unified package that demanded attention and captured the imagination of fans on both sides of the divide between the pop market and progressive scene.

If the opening number, Re-Make/Re-Model, was, as Melody Maker journalist Richard Williams astutely observed, Roxy’s musical manifesto, it was proclaiming that rock’n’roll as we knew it was undergoing a strange and irrevocable transformation.

There’s the knowing post-modern wink that has backing singers intoning a car registration number (‘CPL593A’) in the place where a girl’s name might normally be crooned. Then there’s the hurly-burly blur of continually morphing sax and guitar lines swirling above and below the vocals. Moving quickly, it sounds all above board and ship-shape. Yet listen closely and you might be receiving a transmission from the free-jazz climes of Albert Ayler and Sonny Sharrock.

Recorded at Command Studios in Piccadilly in March 1972, the album was produced by Peter Sinfield, himself just recently divorced from King Crimson. Still managed by EG, and having had experience at the mixing desk from In The Court Of The Crimson King (1969) through to Islands (1971), he was viewed as a safe pair of hands with which to take Roxy out on their first spin.

A former BBC studio, beneath which London’s underground trains could occasionally be heard rumbling, Command’s principal advantage was its cheapness, and accordingly Roxy’s debut album went in the can for £5,000. Given that he’s subsequently recorded in some of the world’s top-flight studios, Manzanera retains a surprising affection for the venue. “It was a big old-fashioned space where the orchestras would’ve played. It was very atmospheric and was absolutely perfect for us.”

With Sinfield and engineer Andy Hendriksen ensconced in the control room up a flight of stairs, and the band in the cavernous depths below, the team worked on a set of songs composed largely the previous year by Ferry. Prior to entering the studio, Sinfield and the band had spent three weeks working on the album’s final shape.

Curiously Roxy songs have a habit on this album as starting off as one thing and then undergoing a startling transformation into something else entirely. Ladytron begins as a languid sci-fi dreamscape, but ends as an exercise in power chord slash and burn. The country music lilt opening If There Is Something rapidly falls away when Mackay’s processed sax solo takes centre stage and we know we’re not in Kansas anymore. The solo, like all the others on the record, isn’t about instrumental prowess. It’s about the seductive qualities and possibilities of the sound itself, manipulated and mediated by Eno. Through his electronic alchemy, the sax hovers listlessly over Thompson’s jackhammer beat and mechanistic piano chords. When Ferry’s vocals burst in on the last third of the song with ‘Shake your hair, girl with your ponytail/takes me right back…’ it’s freakish, unsettling, and utterly magnificent. That distinctive warble which caused heads to turn in King Crimson’s rehearsal rooms and far beyond, was never quite as powerful or as singular as here, captured by Sinfield.

Manzanera readily acknowledges that Ferry’s unusual vocal style was something they understood and exploited. “Nobody sounds like Bryan. It’s very distinctive and it comes from nowhere. It couldn’t be any one else in the whole world with this voice. So we were starting with an advantage.”

Though he would be fired from the band following a drug related break-down, Graham Simpson’s bass work is frequently adventurous and unorthodox. On a track like 2HB or Chance Meeting, every part of the fretboard is up for grabs. “He was probably the most accomplished musician among us all at that time,” says Manzanera. Chance Meeting also contains some of the album’s most haunting guitar. Although his instrument was usually filtered by Eno’s synthesiser, here the space-age sounds are created by more traditional means. “I had a wonderful Gibson 335, which had a hollow body. It just fed back beautifully, and then you could manipulate the note with the tremolo arm and a bit of echo. That’s actually all it is. Now Ladytron; that’s the classic Eno-treated guitar. Terrific stuff.”

The sonic properties of Roxy Music still polarise opinion. Ferry has said that he didn’t care for the sound of the vocals. But Manzanera is philosophical about the album’s production values. “On the first one we always said we were inspired amateurs learning how to make a record, so I listen with nostalgia and fondness rather than a critical eye. It was a moment in time captured and I’m very happy to have been part of it. Pete Sinfield did the best job he could really. But obviously, once you get to For Your Pleasure and Chris Thomas – who’d trained with George Martin – it’s in a different league.”

Yet the exotic, multifaceted soundworlds conjured are due at least in part to Sinfield’s quixotic recording and intuitive response to what was coming into Command’s control room. “It was just the summation of all different individuals putting in their little bits and pieces which then added up to Roxy,” says Manzanera nearly 40 years after their debut. “You couldn’t have planned it. You couldn’t make it up.”

Reaching Number 10 on its release, Roxy Music catapulted the group from being cultish outsiders and into the mainstream. Though future albums would outsell it, when it came to a forward-thinking, truly progressive fusion of diverse ideas, eclectic style and unnerving bravado, the band would rarely be as challenging or inventive.