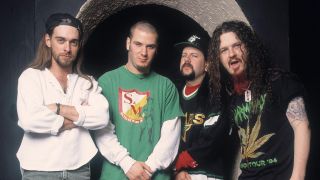 It can’t be stressed enough how important Pantera were in saving heavy metal in the 1990s. Things were getting a little mellow, especially in America. Then along came these four gentlemen from Texas who had captured the true spirit of heavy metal. It came from their hearts and their souls. Metal in the 90s needed Pantera. They were the springboard for so many other bands afterwards.

I didn’t know anything about them until around 1990, when Judas Priest were rehearsing for the Painkiller tour up in Toronto. They had this TV channel, MuchMusic, which was like the MTV of Canada, and I was watching it in my hotel room. And I saw this chap, Dimebag, talking about his band, Pantera, and about heavy metal in general. But he was wearing a British Steel T-shirt, so that really caught my eye. And then they played the video for the song Cowboys From Hell, and I was instantly glued to the screen: ‘What is this? This is amazing!’

So I called the MuchMusic studios and said, ‘Is this guy Dime still there? Because I’d like to pop over and meet him.’ So I jumped in a taxi and went right round to the studio. That was the first time I ever met him in person, and right from the get-go we clicked. He was a massive Priest fan, a massive fan of heavy metal music in general. It was an instant friendship.

That night, they were playing a little club in Toronto, so we went straight from the studio to the venue. That’s where I met Phil Anselmo and Rex Brown and, of course, Vinnie Paul. That Texas hospitality people talk about is a very real thing, and I felt it that night. We were talking and it felt like we’d been friends forever.

We jammed together that night – I went on and did Metal Gods and Grinder. Those bonds were forged on the spot – bonds of friendship, bonds of music. I told the rest of Priest about them, and that was it – we ended up taking Pantera with us to Europe on the Painkiller tour, which is where the band were introduced to the metalheads over there for the first time.

The identity that everyone knew them for was in place right from the start. They were a real gang, you couldn’t help but notice that. They were always together in their dressing room. They’d sometimes come into the Priest dressing room, and we would sit and talk metal while they had a few drinks. Or more than a few drinks…

The band were so hungry for it. They’d play anywhere, go on at any time and give 1,000%. They would do whatever it took to get themselves established and become a solid force in heavy metal. They were very, very hungry – couldn’t wait to get onstage. And they had all the power and resource and energy that any new young band has. Just watching them play night after night, giving it all as if that was going to be the last show they’d ever play, was very potent.

They were certainly party animals – that side of the Pantera myth has definitely not been blown out of proportion. They were living the life, as any new young metal band that’s becoming successful has a right to do. It’s a rite of passage. You’re on tour with a band you think the world of – in their case, Judas Priest – you’re going to countries that you never dreamed you’d ever see, of course you’re going to live the life and eat up everything in your path, just enjoy things to the max.

But at the same time as they were having a good time, they never let it interfere with the music. They took it very, very seriously. They wouldn’t have achieved what they did if they hadn’t taken it seriously.

I never gave them any advice. I don’t think they needed any, frankly. They were so confident and had such a great self-belief. However, they were very humble – they weren’t showing off or bragging, going, ‘We’re going to be the next big thing.’ There was none of that in Pantera. None of the members of the band displayed any arrogance or that element that sometimes exists in rock’n’roll. They were true gentlemen in that respect.

I was lucky enough to record with them in the early 90s. We did a song together, Light Comes Out Of The Black, for the soundtrack to the original Buffy The Vampire Slayer movie. At the time I was in Phoenix and the job had to be done really quickly. I called Dimebag and he said, ‘Just come on down.’ I said, ‘When?’ and he said, ‘Whenever you want.’ So I got on the plane the next day to Dallas, got a cab to the studio and ran through the rough demos that I’d put together. Everyone was like, ‘Got it.’ And bang, we wrapped the whole thing up in a couple of hours.

They undoubtedly influenced me. All of us in Priest would go up onstage and watch them play. You have to be aware of what’s going on around you, because you can gain so much insight and inspiration from new, exciting, game-changing bands. And Pantera definitely changed the game. I don’t think there was anyone else around at the time who had that kind of fierce power and push and aggression and connection.

They had the riffs, the groove, the charisma, the power – all of those things. Of course, in Dimebag Darrell they had someone who was just mindblowing – the guy who changed the way people played guitar in metal. But for me, it was equally about the rhythm section – you haven’t got a band unless you have a great drummer and a great bass player, and Vinnie Paul and Rex Brown were up there with the best.

And it was also the way that they put their songs together that made them special. And the way they developed from Cowboys From Hell to Vulgar Display Of Power to Far Beyond Driven to The Great Southern Trendkill was remarkable. They got more intense and more powerful and stronger. They took themselves to the next level and dragged metal with them.

Of course, they crashed and burned in the end. It was sad, but I don’t think it was unusual, especially when you have four very strong individual characters like they had. Like millions, I wish there had have been an opportunity where they could have mended the fractures and healed the divisions, because at the end of the day it’s the music that matters more than anything else, regardless of your inner demons. You’ve got to try and find a way to overcome that and listen to the sound you make together.

In my heart, I think if Dimebag hadn’t been taken from us, the band would have got back together at some point. Time does that to you. Look at Guns N’ Roses, look at Bruce and Iron Maiden, look at Priest. At some point, we all looked at each other and said, ‘You know what guys, let’s do it, because what we have together is fucking amazing.’ Now Vinnie is gone too, I feel sad that we’re never going to have the opportunity to witness that now. I saw Vinnie many times over the years. He would burst into the dressing room whenever we were in town, and he was always welcome. Success didn’t change him one bit.

I last saw him on Priest’s most recent run through the States – he’d be on the side of the stage, banging away to the music. That’s how Vinnie was – he wanted to be there in the mix. He loved the vibe of heavy metal. He was still the same guy I remember meeting in that little club in Toronto years before, when hardly anybody knew who Pantera were. That’s another measure of success – if you can keep a level head, and not bring your onstage persona offstage. That was Vinnie. That Texas hospitality wasn’t made up. It was part of his soul. He was a very loving, caring, generous guy. Where did you ever read anything negative about Vinnie Paul?

There are so many great Pantera songs. But if there’s one that defines it for me, it’s Cowboys From Hell – that first song I heard all those years ago. But I love Walk, too – you listen to the interplay between what Dimebag and what Vinnie and Rex are doing, and you can hear the essence of Pantera right there.

There never will be another Pantera. They’re a unique, iconic band, and they’ve inspired so many unique, iconic bands in their wake. That’s the stamp they’ve left. There’ll always be bands offering a similar kind of experience – heavy metal thrives on that – but as far as another Pantera, no, never. I don’t think there needs to be. There was only ever one Pantera, and that’s the way it should be left.