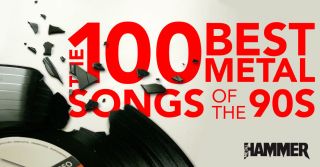 ‘90s metal was good, wasn’t it? So bloody good. It was the decade that gave us Marilyn Manson, Korn, Machine Head and Rage Against The Machine, who are still some of the biggest names in rock and metal. Basically, we love the '90s.

And to celebrate our undying adoration for the ‘90s we (along with some of your favourite bands) decided to count down the 100 best songs of the decade. It took AGES. But we think this is pretty much the greatest ‘90s playlist you’re ever going to find.

Please note, we had one rule in place: Only one song per album allowed.

Coming on like Madness playing with Frank Zappa, Carousel provided an outlet for Mike Patton's crazier musical ambitions that didn't need to be approved by his colleagues in Faith No More. Given free rein, he comes up with song that gets increasingly more eventful as it proceeds but never loses its grip on melody. Like a midget circus colliding with a horror flick colliding with Willy Wonka's sinister uncle.

Frontman Lynn Strait might have tragically died in a car accident in 1998, but his legacy lived on in this dancefloor filler and nu metal classic. The first track from Snot’s only album with him, Get Some, it shoved his talent and attitude in your face.

One of Mike Patton's finest performances. He starts like a crooner, continues with the kind of sinister voice John Wayne Gacy might have used to lure victims into the basement, and climaxes by proving that he can really, really sing. It's possible this song invented System Of A Down all by itself.

Bringing Dave Lombardo in on drums, The Gathering helped Testament sign off the 90s in style, and Riding The Snake has gone onto become one of the Bay Area behemoths’ all-time great anthems.

Getting into Voivod is like staring at a Magic Eye puzzle; defocus properly and a whole new dimension comes into being. Bringing in 1950s sci-fi sound effects and lusher textures to orbit around their off-kilter axis, Jack Luminous's slower pace allowed an easier entry point into their spectacular compound-eye vision of thrash dystopia.

Melvins’ major label debut, and essentially their finest record of all time, Honey Bucket is a furious, three-minute sludge metal workout, lead by Dale Crover’s punishing, complex drums and Buzz Osborne’s filthy riffing. In an album where every track is a delicious celebration of dirge, Honey Bucket is in irresistible highlight.

Known to most people thanks to its inclusion in the Mortal Kombat soundtrack, Twist The Knife came at a time when Napalm Death were once again evolving and changing into a new form. An entirely different line-up and approach it may be from the 'classic' Scum-era material, but this is still a typically teeth rattling 160 seconds of Napalm.

A real blast from the past now, with this choice cut from Josh Homme and co’s self-titled debut – formed from the ashes of desert rock forerunners Kyuss. All grungy, metallic sensibilities, it’s less polished than a lot of Homme’s later ventures and damn cool for it.

Taken from the band's sophomore album, Thus Spake The Nightspirit is a prime example of how Ihsahn and co. were able to meld blistering, speedfreak black metal with the grandiosity of symphonic metal. Still terrifying, though.

Dark, grungy melodies swirled around angsty lyrics about a person desperate to find their own path without giving into conformity. This downbeat, outsider alt-metal would become the New York quartet’s hallmark.