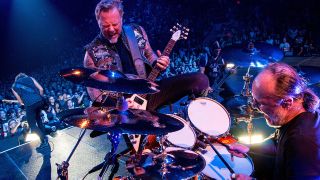 How can you tell if a stage is level? The drummer dribbles from both sides of their mouth. What do you call someone who hangs out with musicians? A bassist. It’s easy to ridicule artists who aren’t centre-stage, but let’s hold fire and see why rhythm sections matter so much.

10) Paul Hinojos and Tony Hajjar – At The Drive In

Recently re-reformed El Paso post-hardcore legends kick us off with a stunning example of foundation for a musical canvas. Hinojos and Hajjar are the understated driving force of fluidity in ATDI’s genre spanning masterpieces; most prominently the mixing of everything from funk-rock to Bossa Nova on 2000’s Relationship of Command.

Being fronted by the greatest bass player of all time, Tim Alexander’s rhythmic ability is genuinely jaw-dropping. Claypool’s banjo inflected strum-come slap style has created riffs that any bass nerd would weep with joy over, while Alexander redefines funk-metal drumming faster than you can say Jerry was a Racecar Driver.

Eccentricity and eclecticism in bounds, Meshuggah’s versatility is beyond hyperbole. Lövgren dispels the idea that bass is an easier version of guitar through his monolithically heavy fretwork, and the countless rhythms per song are masterfully crafted by Tomas Haake; a percussionist so mechanically precise that drum machines sound comparatively sloppy.

So Red Hot Chili Peppers have absolutely had a catastrophic decline in quality, but the Blood, Sugar and One Hot Minute-era Flea and Smith duo were an undeniable force of nature. Bringing majestic funk to the mainstream like never before, the musical mastery infuses every blistering second. Or hot minute.

Alright, it’s not a rhythm section, but given that Cliff Burton outplays almost every guitarist, James can proudly take the bass player’s position. Essentially wielding the right-hand of God, Hetfield’s six-string attack is accentuated by Ulrich’s cymbal chokes and stomping beats in a manner unparalleled in the history of music.

Technicality is definitely not Rammstein’s trump card, but the restraint and functionality of Schneider and Riedel is what creates the infectious dance-laden tunes that decimate a rock club or a mammoth festival crowd. Live however, they allow themselves indulgences, giving us a glimpse of the potential they’re keeping locked away.

It can’t be easy playing alongside the greatest metal guitarist of all time, but if anyone could do it, it was Vinnie Paul and Rex Brown. Without a rhythm guitarist, Rex maintains the sonic assault with impressive dexterity. And immediately recognisable in tone and skill…. Vinnie. Fucking. Paul. ‘Nuff said.

Describing Deftones as nu-metal does the band something of a disservice. The genre is of course fantastic, but Deftones refuse to be confined to it. Cunningham seemingly spawns percussive glory out of thin air and Delgado juxtaposes the soft side of a four-string with a down-tuned sledgehammer of a bassline.

Blimey. If you’re looking for an instrumental masterclass, you’d be hard-pressed to look much further than Tool. Two men of absurd levels of talent have helped to create seemingly freeform soundscapes and released some of the greatest music of all time. Yeah suck it Beethoven. Now, new album please lads.

Combining everything in this list, Bordin and Gould don’t over-indulge and serve the music above all, but when they let loose the dam really bursts. There’s definitively no rhythm section more impressive than this duo. Whether it’s their tone, playing or song-craft, they’re kings. And not just for a day.

What's Going On In Deftones?