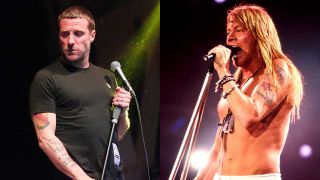 Onstage he's a charismatic, disturbing presence, aggressively spitting half-sung, half-spoken lyrics about small town Britain, mid-life depression and the mundanity of the day-to-day. Stage right stands his partner-in-grime Andrew Fearn, drinking a beer and shuffling from foot to foot. The music is a jumble of primitive, repetitive, combative beats, and it's all on laptop. It's part Ian Dury, part Specials, part John Cooper Clarke; all boredom, discontent and foul-mouthed fury.

But Williamson has Axl Rose's tattoo replicated on his arm. You know the one: the yellow shield with the diagonal red flash, the one with 'Victory Or Death' emblazoned beneath it. It's the coat of arms from the US Army's 32nd Cavalry Regiment, the unit Elvis trained with when he was stationed in Germany, the badge Ferris Bueller wore on his beret.

It turns out Williamson is a Guns N' Roses fanatic.

"I always said that if I got successful I'd get tattoos," he says. "But I didn't want to go down the full Guns N' Roses route. That wouldn't have looked right, so I got some more contemporary tattoos, but I couldn't resist slipping that one in. I'm quite proud of it."

He's tweaked the thing a little, in what feels like a playful bit of contrarianism. Above the shield are the words 'The Stone Roses', but they're written in the font more usually associated with Oasis, while the scroll beneath doesn't bear the 32nd Cavalry's 'Victory Or Death' motto, instead featuring the name of the Sleaford Mods' 2017 album English Tapas.

"I couldn't resist getting it," says Williamson. "I even thought about ripping off the other tattoo [a picture of Monique Lewis, who dated both Axl and Izzy Stradlin, and inspired Don't Cry] and morphing my wife's face into. That's how sad I am. She was up for it, as well, but I haven't got around to it."

Delve into the Sleaford Mods' back catalogue and you'll find other nods to classic rock, with the albums made before Fearn's arrival featuring samples from the likes of Deep Purple, Terry Reid, The Yardbirds, The Sex Pistols, Jeff Beck, The Who and Creedence Clearwater Revival.

"They had the right riffs," says Williamson. "Know what I mean? Flight Of The Rat by Deep Purple is just pure punk. It just sounded like The Clash to me. It was just so fast. It was brilliant. That energy!"

But it's Guns N' Roses we're here to talk about. And Williamson can talk.

"I still don't think anyone has bettered them in the arena of rock. Nirvana came along straight after, and the whole thing shifted overnight, but it really didn't do anything to Guns N' Roses.

"Bands who start their own thing usually remain untouchable. Guns N' Roses. The Sex Pistols. The Stone Roses. Black Sabbath. Oasis, to a certain degree. The Rolling Stones. The Beatles. Led Zeppelin. They can't be touched because they started their own thing, and anything that comes in underneath gets thrown out of the window after a few years.

"It's giving me goosebumps now just thinking about it it. It was so inspiring as a 20/21-year-old. It was quite something to sit there and be educated by them that you didn't need to go to a fucking university or a music college. It was just all there for you in their records and in those videos.

And what can Jason say to the average Guns N' Roses fan that'll make them come and see his band?

"I sweat a lot. I scream a lot. I've got veins in my neck. I do all that shit, just like Axl did. We both follow no one, creating our own thing. We're both at the forefront of what we do, and everyone else is behind. So if anybody fancies it they ought to bear those things in mind.

"But apart from that? I wouldn't suggest anyone from the rock world come and see us. There's no guitars, none of that business. They'd be so fucking disappointed."

Sleaford Mods release a new, self-titled EP on Rough Trade Records on September 14th. Lead track Stick In A Five And Go is out now.

"The Use Your Illusions were quite overproduced. You could see why Izzy Stradlin had a problem with them. He wanted to do the 16-track thing, and Axl Rose was having none of it.

"It's quite an emotional song. Axl Rose clearly had mental issues, and Yesterdays is one of those songs that captures that sadness. Anyone with issues related to childhood problems or trauma can connect with that."

"It just cuts in, doesn't it? It's like, 'what the fuck are you doing?' The lyrics are a bit cheesy, but it was written early on, and we forget that the early 80s were only a few years away from the mid-70s, when all really juicy stuff was happening. It's all connected. So you can forgive the cheesy lyrics, and it's a really fantastic song. Brilliant, really."

"Brilliant melody. Lovely, swishy swashy song. Again, the lyrics are a bit cheesy, and sometimes you get the impression with Axl Rose that there's a really American 80s high school drama thing going on. All my mates were sucked into those Molly Ringwald films. We were all brought up on them, and some of the lyrics remind me of that. It's a really good tune."

"A really good punk song. They had a really great ear for punk. They actually fused punk with metal, but it wasn't 70s Punk, it was kinda new wave punk. That's what I get from it, anyway: The Exploited, and Anti-Pasti. They probably weren't listening to it, but that's what I get. And there's obviously a bit of glam in there from the New York Dolls.

"The songs are slightly ruined by the fucking production. It's a bit too much, and sometimes Axl's voice borders on the insane - it's like, 'what the fuck is that?' - but that's rock, isn't it?"

You Could Be Mine

"A fucking fantastic song. It can stand alongside anything for Appetite for Destruction: that chorus, that intro, it just makes the hairs on your arm stand up. It's so fucking good. Really, really exciting.

"I know by this time they're all blown up and everyone's slagging them off for doing two double albums that had patchy shit on them, but what can you say? I don't think it matters really."

"I really like the Elton John thing. Axl was really into that kind of shit, and it really comes out in that tune. He gets a bit, 'Oh woah is me,' but you can't really fault the tune. It's got some great lines in it, he's got a great voice, and he's got a real ear for melody. it's not just punk rock and metal - he really can sing!

"He also made you feel like it must be quite shit to be a massive rock star, that it's not all it's cracked up to be, which I thought was good. He was one of the first people to say, 'look, I'm struggling with this.' Before Axl, people had been like, 'Hey! Everything's glitzy, everything is alright!", and he wasn't like that. Then obviously Kurt Cobain took it to a whole new level.

"It's horribly sexist. It's almost like he hates women. I'm assuming he's grown up now and that's changed, but I wouldn't like to ask him. But you really get the feeling of how they struggled, and how they kept believing in themselves, and that's the great thing about it.

"He moved from Indiana, which must have been a fucking shit-hole. He gets to LA and is attacked in the bus station. It freaks him out. He jumps from one band to another, and that's how it should be. Nobody does that anymore, but it really influenced me. That's why I kept going.

"You meet these people and bands at festivals, and they've just come out of University, and you think, 'for fuck's sake!' You just want people to live it. And this song gives that out."

Out Ta Get Me

"An absolute fucking testament to paranoia, to anger, and to blame. It's fantastic. 'They're out to get me, they won't catch me, I'm fucking innocent'... that's just fucking brilliant, absolutely brilliant. It's a youth anthem.

"Things like this weren't really addressed: the paranoia of it all. The dark side of life wasn't really looked at in rock, apart from theatrically, with Black Sabbath and Alice Cooper. It wasn't really looked at sociologically, and in my opinion Guns N' Roses were one of the first bands to tackle it properly. All the fantasies and romanticism that had gone before were there, but there was also a gritty side to it. The comedown side to it. The real side to it."

"It's horrifically misogynistic, but the riff and the hook and just un-fucking-real. It was written with West Arkeen, who who lived with the band and later died of a drugs overdose. He came up with the hook [sings, 'So Eeeeaaaaasy, but nothing seems to please me']. Again, it's fantastic. Just absolutely brilliant."

"The climax. The euphoria that comes from that intro. You know everything's going to be OK. You can feel they've gone through this hell, and they've arrived at this place that didn't really do them any good. They broke up, but it's a massively positive song, and it's absolutely fantastic.

"People say they didn't fulfil their potential - Keith Richards says bands don't stay together long enough - but really? They didn't have to. That one album is up there with Never Mind The Bollocks, with with any classic debut album. It's up there. Totally."